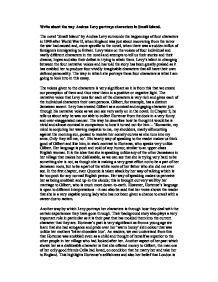 Write about the way Andrea Levy portrays characters in Small Island. The novel 'Small Island' by Andrea Levy surrounds the happenings of four characters in 1948 after World War II, when England was just about recovering from the terror the war had caused and, more specific to the novel, when there was a sudden influx of foreigners immigrating to Britain. Levy takes on the voices of four individual and vastly different characters in the novel and attempts to tell us their stories and their dreams, hopes and also their defeat in trying to attain them. Levy's talent in changing between the four narrative voices and has told the story has been greatly praised as it has enabled her to produce four vividly imaginable characters that all have their own defined personality. The way in which she portrays these four characters is what I am going to look into in this essay. The voices given to the characters is very significant as it is from this that we create our perception of them and thus view them in a positive or negative light. The narrative voice that Levy uses for each of the characters is very rich and gives each of the individual characters their own persona. ...read more.

Another way by which Levy portrays her characters is through how they deal with the certain experiences they have gone through. Their background story also plays a very important role in particular as it is their past that has molded them into the current character that they are. Hortense's past is very significant as from a young age we learn that she had arrogance and pride over her 'warm honey' skin colour that was unlike her mothers 'bitter chocolate hue'. As readers, we can understand from this that Hortense was snobbish even as a child and thought of herself as superior to the other people in her village who had looked after her. Another aspect of her past which shows her as a dislikeable character is that she offered money to Gilbert, the man one of her only good friends Celia had loved, on condition that he marry her and take her to England. This highlights Hortense's selfishness and also her belief that London is the golden city of dreams - something that we, as the readers, know is not true. Her past experiences in Jamaica show us that her head is way too high up in the clouds and that she is much too unrealistic for her own good, making us perceive her in a negative light. ...read more.

Bernard's racist views, however, would be seen as incorrect and therefore he would be seen as wrong, along with Hortense as well, who thought she was superior due to her lighter skin colour. Thus, it is the attitudes of the character that Levy chooses to show us that also play a role in how they are perceived by us. Another example by which Levy makes our perception change based on a characters attitude is Hortense's idea that London is the city of gold and dreams; an idea which we all know is false. She believes that by coming to London, she'll be able to live the life that she imagined her father would have given her had she lived with him. Her unrealistic and unreasonable way of thinking is irritating for the readers, who already know that this is totally untrue, which adds to our perception of dislike for her. Conclusively, Levy has made use of many different techniques in order to make us think a certain way about a character. Her structure and use of language are very significant aspects as these are the two main ways by which she portrays her four characters, helping her achieve the quality of story telling that has helped her gain the many awards that she has for this novel. ...read more.