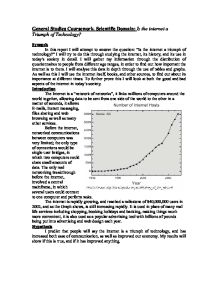 General Studies Coursework, Scientific Domain: Is the internet a Triumph of Technology?

General Studies Coursework, Scientific Domain: Is the internet a Triumph of Technology? Synopsis In this report I will attempt to answer the question: "Is the internet a triumph of technology?" I will try to do this through studying the internet, its history, and its use in today's society in detail. I will gather my information through the distribution of questionnaires to people from different age ranges, in order to find out how important the internet is to them. I will analyse this data in depth through the use of tables and graphs. As well as this I will use the internet itself, books, and other sources, to find out about its importance at different times. To further prove this I will look at both the good and bad aspects of the internet in today's society. Introduction The Internet is a "network of networks", it links millions of computers around the world together, allowing data to be sent from one side of the world to the other in a matter of seconds, it allows E-mails, Instant messaging, files sharing and web browsing as well as many other services. Before the internet, networked communications between computers was very limited; the only type of connections would be single-user bridges, in which two computers could share small amounts of data. The only real networking breakthrough before the internet, involved a central mainframe, in which several users could connect to one computer and perform tasks. ...read more.

From this I can also gather that all the people in the questionnaire have an internet connected computer in their house. 5. How dependent are you on the internet? Option Frequency Extremely 5 A lot 8 A little 2 Not at all 5 From this Graph I can see that the majority of people need the internet to some extent, with only 5 of the 20 people saying they are not dependent on it at all. 6. Do you think the internet is a triumph of technology? Option Frequency Yes 18 No 2 This is very useful information to answer my hypothesis, as 90% of the people who filled in the questionnaire think the internet is a triumph of technology. This is pretty consistent with the amount of people who rely on the internet, and those who use it a lot. 7. How many internet connected computers do you have in your home? Option Frequency 1 8 2 6 3 3 4 3 5 0 6+ 0 The results from this show that most people have 1 computer in their home connected to the internet, and that none of the people have 5 or more, this question included the use of a laptop. 8. How safe do you think it is to use bank/credit details on the internet? Option Frequency Very Safe 3 Mildly Safe 2 Not Safe 12 Depends 3 I added this question to see how safe people think they are on the internet. ...read more.

Having said this, many of the problems in using the internet can easily be avoided, by using the proper software and precautions. The questionnaires I distributed gave me a good idea of how people use the internet, what they think of it and how it makes things easier for them, from the questionnaires I can conclude that the internet is an important aspect in many areas. Therefore I think the internet is a triumph of technology. Evaluation I think my study went quite well, although I could have researched from other sources, E.g. books and newspapers to get more secondary research about the internet, since I was collecting information about the internet from the internet itself, some of it may have been biased. As well as this I think I should have distributed my questionnaires to a wider audience, or possibly a set of questionnaires to different age ranges and professions to get a better idea of people's different internet usage. Further possibly problems with the questionnaires are that they can potentially have low validity, people may lie/misunderstand a questions and give an inaccurate answer, as well as this they can leave areas blank or give illegible answers to questions that require an opinion. I think I chose a good topic, as it is both something I am interested in and something I use a lot, as well as this there are a wide variety of sources, to find information about the internet on. ...read more.