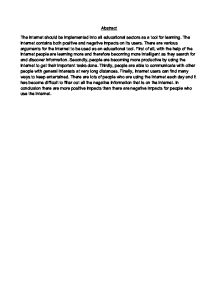 The internet has become a tool for increasing productivity like nothing else before it. It can function as a library, an encyclopedia, or simply as a replacement for pencil and paper. It can also serve as a telephone, deliver mail like a mailman, and act as a file cabinet for collections of information (Nelson 2008, p.25). Some other productivity tools also include planned lessons, virtual field trips, blogs, book reviews, historical archives, tutorials, simulations and maps; all in all because of the power of the internet, we assume that it is saving us time and money. It is true that if used carefully the internet can increase our productivity (Pettinger n.d., para 1) Thirdly, the internet can help bring people closer together. How the internet has brought people together goes back to the origins of the internet where it got started in 1957. It was the international Geophysical year where people with a common interest came up with the idea of linking computers from different locations together. By 1974 scientists developed a common language between computers that allowed different networked computers to communicate with each other and by 1980 the internets purpose became clear as it became a common communicating tool with the success of email. The internet became more popular as it continued to be driven by governments and academic communities. ...read more.

In conclusion there are a number of reasons why the internet should be implemented into all educational sectors as a tool for learning. People who use the internet can increase there intelligence by improving there reading, writing and overall grasp of knowledge. The Internet also helps increase productivity because it contains many tools for saving time and money, and also helps bring people closer together and keeps you entertained. Although there are information that can cause negative impacts on internet users it can be overcome through increased intelligence. It seems that the internet has more positive impacts than there is negative on its users so the internet will only continue to grow into something that will benefit all of its users. Reference list Mc Pherson, Pam 2003, Communicating on the Net. Southwood press, Sydney. Nelson, Kristen, J 2008, Teaching in the digital age, 2nd ed. Corwin Press, California. Pew internet & American life project 2010, Does Google make us stupid? Retrieved March 5, 2011 from http://pewresearch.org/pubs/1499/google-does-it-make-us-stupid-experts-stakeholders-mostly-say-no Soong, R 2000, The internet for entertainment and information. Retrieved March 3, 2011, from http://www.zonalatina.com/Zldata129.htm Standler, R 2002, Computer Crime. Retrieved March 4, 2011, from http://www.rbs2.com/ccrime.htm Whitney, L 2010, The internet can make you smarter expert say. Retrieved March 3, 2011, from http://news.cnet.com/8301-1023_3-10457411-93.html William, J.B. and Jacobs, J. 2004, Exploring the use of blogs as learning space in the higher education sector. Australasian Journal of educational technology. Retrieved February 28, 2011, from http://www.ascilite.org.au/ajet/ajet20/williams.html WordNet Search 3.0 n.d., Retrieved March 5, 2011 from http://wordnetweb.princeton.edu/perl/webwn?=internet ...read more.

****
The writer has researched well and made some good points. My main criticism remains that it does not fully address the title and strays way beyond examining the benefits of the internet for learning.