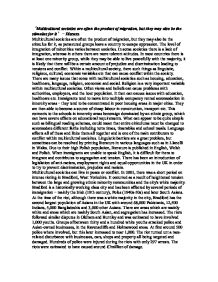 Multicultural societies are often the product of migration, but they may also be the stimulus for it Discuss.

Multicultural societies can live in peace or conflict. In 2001, there was a short period on intense rioting in Bradford, West Yorkshire. It occurred as a result of heightened tension between the large and growing ethnic minority communities and the city's white majority. Bradford is a historically working class city and has been affected by several periods of immigration - mainly the Irish (19th century), Poles (1940s-50s) and later South Asians. At the time of the riot, although there was a white majority in the city, Bradford has the second largest population of Asians in the UK with around 68,000 Pakistanis, 12,500 Indians, 5,000 Bangladeshis and 3,000 other Asians. There are areas which are mainly white and areas which are mainly South Asian, and segregation has increased. The riots followed similar disputes in Oldham and Burnley and was estimated to have involved 1,000 youths. Groups of between thirty and a hundred white youths attacked police and Asian-owned businesses, in the Ravenscliffe and Holmewood areas. At first around 500 police where involved, but this later increased to near 1,000. The riot turned unt a race-related disturbance with businesses, cars, shops and property all being targeted and damaged. ...read more.

In the 21st century, there has been an increased rate of economic migration from Eastern Europe from the enlargement of the EU. Multicultural societies are created by migration. As one country has a high level of pull factors, others have many push factors which cause people to move away where they can have a better life. Some people migrate due to economic problems when they need to find employment, whereas others move to be closer to family who may have already migrated. Common push factors are war and poverty. Many Asian countries suffer from severe poverty and people are desperate to escape, whereas previously many Europeans have migrated to escape the affects of the Second World War. The UK appears to have very good pull factors, which has created a highly multicultural society. The multicultural society that the UK has become is now the stimulus for much of the migration that continues to occur. Many immigrants see that the strong and concentrated communities of ethnic groups that have built up over many years, are now reasons for others to migrate. The affects of previous years of migration have now made it possible for many to find employment in the UK that they would not find in their home countries. ...read more.