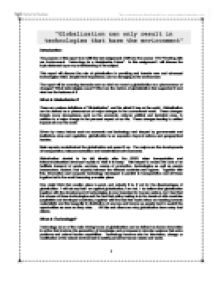 &quot;Globalization can only result in technologies that harm the environment&quot; - Discuss

"Globalization can only result in technologies that harm the environment" Introduction: The purpose of this report is to fulfill the last assignment (TMA) for the course T172 "Working with our Environment: Technology for a Sustainable Future". In this assignment I will discuss the topic statement upon my understanding of the subject. This report will discuss the role of globalization in providing and transfer new and advanced technologies which, despite their importance, can be damaging to the environment. The report will be covering elements such as what we mean by globalization as a phenomenon of changes? What technologies mean? What are the factors of globalization that supported it and what are the features of it. What is Globalization? There are various definitions of "Globalization", and the effect it has on the world. Globalization can be defined as a phenomenon of major changes in the conventional world. These changes include many atmospheres such as the economic, cultural, political and technical ones, in addition to a major change in the personal aspect of our life. These changes leading to unified impacts all over the world. Driven by many factors such as economic and technology and shaped by governments and institutions rules and regulation, globalization is an expansion beyond nations and geographical borders. ...read more.

An example would be transportation and telecommunications technology which have greatly reduced the barriers of space and time. Transportation and telecommunications development led to what is known know of economic globalization and free trade. Free trade leads to increasing of production to cope with competition, and eventually more depletion of natural resources and more environmental damage. Features of globalization: Although globalization is wide spread phenomenon, still it is constraints by some factors such as political affairs, economical abilities and cultural differences. But despite these constraints, globalization's image is very obvious in our world, whether economically, politically or socially. The argument is weather the earth's limits/ finite nature can cope with the globalization. Some of the main effects of globalization are: * The efficiency effect: Free trade and de-regulated market are the image of the economic globalization. Underpinned with technological development, increased competition in efficiency in production and selling has occurred. The competition drives countries to increase production and their exports / imports practices, especially the developing countries, in order to survive among the others. It is a result of this above scenario that the depletion of natural resources and emission of industrialized wastes have increased. ...read more.

[Working with our environment, Them 4, page 28]. * The transport effect: The interconnected expanding world lead to growing in transportation infrastructure, with all the environmental implication related to travel and transport. * The geographical effect: The economy situation and the global division, together with the use of technology in manufacturing and transportation enabled multinational companies to relocate significant part or all of their manufacturing operations to cheaper labour countries. (e.g. Nike subcontract the manufacturing process to factories in Southeast Asian countries). Hazardous wastes, which accumulate from the production are both difficult and expensive to dispose and hence are often dumped in those countries. The shifting part also includes exporting the wastes to poor countries. Conclusion: Globalization has a dark side. But it can also bring tremendous opportunities and benefits. Technologies can also be beneficial to the environment; this is particularly true of the biotic pesticides and the new technologies of saving land and water. There are vast possibilities in terms of energy and material conservation, new environment-friendly products applications in non-crop agriculture such as newer possibilities of agro-processing and waste recycling. The real issue is not technology or globalization as a technological paradigm. It is institutions and rules that create powerful incentives and preconditions for sustainable development to take place. Equally important is the nature of incentives and deterrents for positive and negative behavior. ...read more.