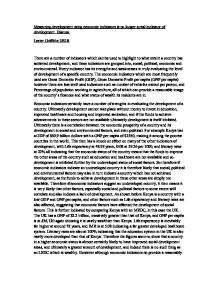 Measuring development using economic indicators is no longer a real indicator of development. Discuss. Lester Griffiths U6LB There are a number of indicators which can be used to highlight to what extent a country has achieved development, and these indicators are grouped into, social, political, economic and environmental. Every indicator has its strengths and weaknesses in truly evaluating the level of development of a specific country. The economic indicators which are most frequently used are Gross Domestic Profit (GDP), Gross Domestic Profit per capita (GNP per capita) however there are less well used indicators such as number of vehicles owned per person, and Percentage of population working in agriculture, all of which can provide a reasonable image of the country's finances and what status of wealth its residents are in. ...read more.

So therefore if economic indicators indicate an undeveloped country it is therefore likely that social, political and environmental factors may also in turn indicate a country which has not achieved development, as the funds to achieve development in these other areas are simply not available. Therefore if economic indicators suggest an undeveloped country, it then means it is very likely that other factors, especially social and political factors to some extent will correlate and also indicate a lack of development. As shown before Kenya is a country with a low GDP and GNP per capita, and other factors such as Life expectancy and literacy rates are also affected, suggesting that economic factors have affected the development of social factors. This is further indicated by comparing Kenya with an MEDC, in this case the UK. ...read more.

Political instability would definitely not be truly indicated by an economic indicator. For example there is great political unrest in Zimbabwe, with Robert Mugabe having forced his way into power as a dictator. However the economic indicators of the country would indicate that it is far more developed than Kenya with a GDP of $3.42 Billion, suggesting it is more developed however the GNP per capita is $200 which is lower than that of Kenya as Zimbabwe is a large country with a greater population. So economic indicators do not show: .Differences in population size . Political instability of the country .Distribution of the wealth in a country- the rich may hold most of a country's wealth making it appear more developed when most people are not enjoying the GDP of the country. . Daily aspects of life not considered- free speech, the right to vote, freedom from discrimination. ...read more.