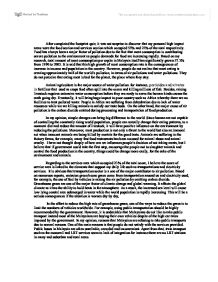 My Environmental Footprint and ways I could minimise it.

After completed the footprint quiz, it was not surprise to discover that my personal high impact areas were the food section and services section which occupied 55% and 23% of the total respectively. Food has always been a major factor of pollution due to the fact that meat consumption is contributing severe pollution to the environment as people demands for food are increasing rapidly. Based on my research, total amount of meat consumption per capita in Malaysia itself has significantly grown 57.3% from 1990 to 2003. It is said that this high growth of meat consumption rate is the consequences of increase in income and population in the country. However, people do not realize that meat eating is creating approximately half of the world's pollution, in terms of air pollutions and water pollutions. They do not perceive that eating meat is bad for the planet, the place where they stay. Animal agriculture is the major source of water pollution. for instance, pesticides and nitrates in fertilizer that used as crops feed often spill into the ocean and killing millions of fish. Besides, raising livestock requires extensive water consumption before they are ready to serve the human kinds causes the earth going dry. ...read more.

Greenhouse gases are one of the major factor of climate change and global warming. It affects the global climate as it has the ability to hold heats in the atmosphere. As a result, the increased sea level will cause low-lying coastal area submerged in water while the world population is rapidly increasing. This will be a serious consequences if the situation is worsen day by day, In the effort to reduce the high rate of greenhouse gases, one of the ways to reduce the gases is to limit the numbers of vehicles worldwide. For example, using public transportation should be highly recommended by the government. However, it is undeniable that Malaysians do not like to take public transport instead most of the Malaysians are buying their own vehicles despite of the high car taxes imposed by the government. In my opinion, reasons that Malaysian are refusing to take public transports due to several reasons. One of the main reasons is that people do not satisfy with the services provided. Public buses in Malaysia are often unreliable, crowded and inconvenient. Apart from that, train transport such as the monorail and LRT services seem to lack of integration for instance there are no LRT stations in many and suburban and rural areas. ...read more.

One issue that triggers me to concern for the environment is poverty. The effect of climate change has serious impact on the poverty as it affects on the people livelihoods, health and agriculture production. Nations such as Africa is facing more droughts every year due to climate changes. As a result, the poor people starved to death due to insufficient food source in the country. The problem of poverty will be getting serious if human beings lost the ability to produce food as the world temperature keep rising. In my opinion, poverty is the result of mistakes that we made in the past, and these people are suffering from our mistakes. As a conclusion, I feel that I am more to pessimists, that totally agree to strong sustainability. I feel that behind everything human-made capital, there must be a side effect that takes place. Technology can be used to assist our daily lives, but will never as a substitute for natural resources, Businesses should take necessary steps towards sustainability by conducting social responsibility at the moment. As we can see from the Japan's massive earthquake and tsunami strikes recently, it is time for us to question if our modern way of living should be sustained in a way that satisfy the triple bottom line, people, planet and profits. ...read more.