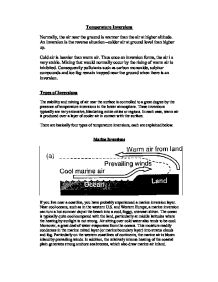 Temperature Inversions Normally, the air near the ground is warmer than the air at higher altitude. An inversion is the reverse situation--colder air at ground level than higher up. Cold air is heavier than warm air. Thus once an inversion forms, the air is very stable. Mixing that would normally occur by the rising of warm air is inhibited. Consequently pollutants such as carbon monoxide, sulphur compounds and ice fog remain trapped near the ground when there is an inversion. Types of Inversions The stability and mixing of air near the surface is controlled to a great degree by the presence of temperature inversions in the lower atmosphere. These inversions typically are very extensive, blanketing entire cities or regions. In each case, warm air is produced over a layer of cooler air in contact with the surface. There are basically four types of temperature inversions, each are explained below. Marine Inversions If you live near a coastline, you have probably experienced a marine inversion layer. Near cool oceans, such as in the western U.S. and Western Europe, a marine inversion can turn a hot summer day at the beach into a cool, foggy, overcast shiver. The ocean is typically quite cool compared with the land, particularly at middle latitudes where the heating by sunlight is not strong. ...read more.

A relatively shallow marine layer of several hundred meters to one kilometre in depth is formed. Separating the two air masses is a strong temperature inversion layer, which persists almost continuously during the spring and summer half of the year and appears occasionally at other times of the year. The temperature inversion suppresses convection and mixing, allowing pollutants to build up in the lower layer. Large weather systems that create conditions leading to high-pressure subsidence are fairly common. In some regions, these weather patterns regularly generate unusually intense hot winds. When the subsiding air encounters a cool stable layer near the surface, a strong temperature inversion can take place, as in the Los Angeles area. Radiation Inversions A radiation inversion is created when heat is rapidly lost from the surface by thermal radiation. At night, the ground and the air just above the ground can cool off by radiating their heat energy while the air higher up remains warm. This is because air, particularly dry air, is a poor heat radiator, whereas land is an excellent radiator. The air just above land can lose heat by coming into direct contact with the surface. However, the air must be mixed downward to the surface. ...read more.

Regional Subsidence Inversions When air flows over an obstacle such as a mountain range or blows from a high plateau and descends into a lower basin, a regional subsidence inversion can be created. Air that descends heats by adiabatic compression. This descending air therefore creates a hot wind, like the Santa Ana winds that often blow through Los Angeles. The air is typically very dry. It might be dry because of the source over land, or it might have happened as it rose over a mountain barrier, cooled, and lost water vapour by condensation and precipitation. As it is compressed, the dry air heats up along a dry adiabat. This produces the greatest warming for a given altitude change, which explains the unusually high temperatures of these winds. If the descending air encounters colder air at the surface, it may be unable to push aside this denser air. The warm winds may then spread out above the surface layer, producing a temperature inversion. In other cases, strong subsidence winds fill a region with dry warm air that later cools at the surface by radiation, creating a radiation inversion. In southern California, weak Santa Ana winds often blow from the northeast across the mountain ranges to the north of the Los Angeles basin. These warm winds can trap colder denser marine air that is often present in the basin. These warm winds are usually associated with a high-pressure system. ...read more.

A slightly weak introductory response to the 'temperature inversion' title, this is due to the lack of clear and insightful knowledge necessary at A level. The marine, high pressure and radiation temperature inversions are responded to in high detail, conveying ...

A slightly weak introductory response to the 'temperature inversion' title, this is due to the lack of clear and insightful knowledge necessary at A level. The marine, high pressure and radiation temperature inversions are responded to in high detail, conveying plenty of depth in research. However, they could be compared to show further knowledge and understanding of temperature inversion theories, and to gain more marks. Although it is hard to judge to extent to which the response has fulfilled its criteria due to the lack of depth in the title, I personally feel the overall response was satisfactory

The main analysis is also satisfactory, the depth of research and relevant information is excellent. However, at A level a more analytical approach would be to include case studies with more information than just the mentioning of LA. Short and long term effects could be applied to a case study, including solutions to the problems of photochemical smog produced by temperature inversions, for example pollution reducing policies in Britain. By including this aspect of human geography, a synoptic element is brought into the essay, which is essential at A level. The diagrams are good, especially for marine temperature inversions, but the annotations could be in more detail. Although it may not be absolutely necessary, there is no conclusion or final paragraph to give an overall opinion on temperature inversions, which I feel is so important at A level to show a good level of understanding about the topic.

Grammar, spelling and punctuation are all excellent. There is an exceptional amount of geographic terminology, which is vital at A level, even without the inclusion of case studies. The introduction could have been made stronger with more powerful geographic terminology, as it sounded similar to that of GCSE standard. A clear definition of temperature inversions to initiate the essay would improve the mark of the essay.