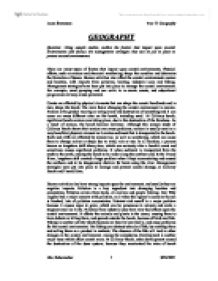 Dee Why Lagoon had a major concern with pollution, as it when the lagoon's access to the sea is blocked, lots of pollution accumulates. Nutrient-rich runoff is a major problem because it causes algae to grow, which can be poisonous to animals and emits a stagnant smell as it rots. Pollution from industrial uses have very bed effects upon the coastal environment. It effects the animals and plants in the ocean, causing them to have defects or killing them, and spreads outside the beach, because of birds and fish. Fishing is another activity which humans are heavily involved in, and cause problems for the coastal environment. Net fishing can destroy schools of fish, by catching them and selling them as a product in markets. The absence of the fish will lead to other changes in the coastal environment, among the ecosystems. Development is another major issue which effect coastal areas. At Collaroy Beach, urban development caused the destruction of the dune system, because they accelerated the rates of beach erosion. ...read more.

Groynes were also placed on the Gold Coast, where development along the coastline was becoming a major issue. Vegetation was also planted to stabilise the banks, and sand pumping was the main strategy used, to accumulate more sand at the Southern end of the beach. On Sydney's northern beaches, such as Collaroy, sea walls were built in an effort to protect the housing and apartments around the coastline, as well as stop the foredune from eroding. Councils also involve strategies which are based more around the community and their awareness of the beach, rather than trying to manage the actual coast. Educational programmes teach children about caring for their coastal environment, and 'buy-back' schemes are sometimes put in place by the council, in an effort to buy back land which is close to the shore. In conclusion, there are many factors that influence the coastal environment. Both nature and humans contribute to shaping the coast, because of their physical elements and human activities. In the cases where these factors have caused problems to the coast, management strategies have been put into place to manage the shore as well as educate the community. Laura Stevenson Year 11 Geography Mrs. Schumacher 1 8/05/2007 ...read more.