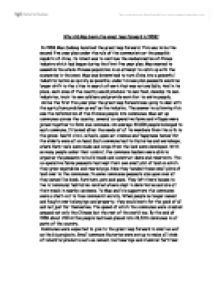 Why did Mao begin the great leap forward in 1958?

Why did Mao begin the great leap forward in 1958? In 1958 Mao Zedong launched the great leap forward. This was to be the second five year plan under the rule of the communists or the people's republic of china, its intent was to continue the modernisation of Chinas industry which had begun during the first five year plan. Mao wanted to assemble the whole Chinese population in an attempt to catch up with the economies in the west. Mao was determined to turn China into a powerful industrial nation as quickly as possible, under his new plan peasants would no longer drift to the cities in search of work that was not available. ...read more.

With so many people under their control, the commune leaders were able to organise the peasants to build roads and construct dams and reservoirs. The co-operative farms peasants had kept their own small plot of land on which they grew vegetables and reared pigs. Now they handed these small plots of land over to the communes. In some communes peasants also gave over all they owned like beds, furniture, pots and pans. They left there houses to live in 'communal habitation centres' where slept in dormitories and ate all their meals in nearby canteens. To Mao and his supporters the communes were a short-cut to true communist society. When people no longer owned and fought over belongings and property, they would work for the good of all and not just for themselves. ...read more.

As 1958 carried on, the figures for the manufacture of steel, coal, timber, cement, fertiliser, and a hundred other industrial merchandise showed a stunning rise. The key element in the great leap forward was party propaganda. The government made every effort to build the public up into a frenzy of enthusiasm for their work. Posters, Slogans and Newspaper articles recommend the Chinese to work long hours, whatever the weather and no matter how unpleasant the conditions. Wherever people worked, loudspeakers played revolutionary music and stirring speeches, encouraging workers not only to reach but to exceed the plans targets. As a result of this new way of working, many remarkable construction projects were complete in record time. The Chinese nation began to believe that Mao Zelong was right, that it really was possible to accomplish any task whatsoever. ...read more.