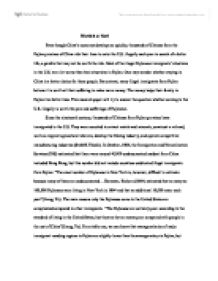 Worth is or Not

Worth it or Not?

Even though China’s economy develops so quickly, thousands of Chinese from the Fujian province of China risk their lives to enter the U.S. illegally each year in search of a better life, a gamble that may not be worth the risk. Most of the illegal Fujianese immigrants’ situations in the U.S. are a lot worse than their situations in Fujian. One may wonder whether staying in China is a better choice for those people. By contrast, many illegal immigrants from Fujian believe it is worth all their suffering to make more money. The money helps their family in Fujian live better lives. This research paper will try to answer the question whether coming to the U.S. illegally is worth the pain and sufferings of Fujianese.

Since the nineteenth century, thousands of Chinese from Fujian province have immigrated to the U.S. They were recruited to extract metals and minerals, construct a railroad, work as migrant agricultural laborers, develop the fishing industry, and operate competitive manufacturing industries (Stefoff,Takaki). In October, 1996, the Immigration and Naturalization Services (INS) estimated that there were around 40,000 undocumented resident from China included Hong Kong, but this number did not include countless undetected illegal immigrants from Fujian: “The exact number of Fujianese in New York is, however, difficult to estimate because many of them are undocumented …However, Einhorn (1994) estimated that as many as 100,000 Fujianese were living in New York in 1994 and that an additional 10,000 enter each year”(Liang, Ye). The main reasons why the Fujianese come to the United States are complicated compared to other immigrants.  “The Fujianese are certainly poor according to the standard of living in the United States, but they are by no means poor compared with people in the rest of China”(Liang, Ye). From table one, we can know that average salaries of major immigrant- sending regions in Fujian are slightly lower than the average salary in Fujian, but they have advantages in per capital income. There is no reason to believe that major immigrant-sending regions are poorer than any other regions in China

We can conclude that poverty is not the real reason why the Fujianese who risk their lives to come to the U.S. Instead, it is “a sense of relative deprivation that causes Fujianese peasants to make desperate attempt to migrate”(Liang, Ye). Because China’s economy develops so quickly, it causes an extreme inequality in wealth distribution. “The increased inequality in China makes people at the bottom feel a sense of relative deprivation and desperate to find ways to make money and become rich. Going to the United States, through either legal or illegal channels, is an alternative way of getting rich, they think”(Liang, Ye). The income of a household in Fujian is increased. “One source of increased relative income disparity is remittance”(Lyons). When the Chinese return from oversea, their great wealth motivates Fujianese to immigrate to the U.S continuously. “Under such circumstances, migration is perceived as ‘the thing to do’ -- the only way that young people can advance economically ” (Portes). “In some villages in Fujian, almost 90 percent of the young people have gone abroad ”(Ye). “Young people who are reluctant to go abroad are considered meichuxi (no great future)”(Zhang, Liang). Relative deprivation is the major reason for Fujianese who immigrate to the U.S. illegally.

However, although local Fujianese know how much money one can make in the U.S., they do not know how horrible the trip to the U.S. could be and how hard the one has to work to make that money under bad work conditions in the U.S. This is how an illegal Fujianese immigrant’ describe his experience in the U.S.:

“For me, the most formidable obstacle is finding a stable job. Keep in mind that the main reason I am here is to make money. I like U.S. dollars. They’re worth much more than Chinese yuan. Besides U.S. dollars, there’s nothing I like about the United States. The living environment here is not as good as in Fuzhou. Actually, it is much worse than there…After I got here, my family became a meiguoke’s  [Guest from the Beautiful Country] family, and of course, they are very happy. … After all, I agree with the saying among the Fujianese, ‘After you see the whole world, you will find that Fuzhou is the best place on earth’”(Chin, 297)

The only thing Fujianese like about the U.S is the dollar. They have to work very hard. One person said, “Work in America is tough. I work in a restaurant for more than 12 hours a day and rarely have a chance to see the sunlight. It’s like I am a cow or a horse…Also, people here care only about their own business. This is a utilitarian society where people have no compassion”(Chin, 296). The work situation can be presented more clearly in the following table.

In the first couple of years, most of the money that Fujianese make is used to pay off their debt. According to a senior INS official, “They can work in a dishwasher job for the rest of their lives to pay off the debt”. But according to Chin’s research, most of his respondents will repay their debt in first two years, and then they send money home.

Fujianese have to face not only bad working conditions in the U.S. but also the pain that mental illness take to them. Chin explained: “Since most smuggled Chinese in my sample did not speak English, they were isolated from mainstream society. For them, the Mountain of Gold was Chinatown. It was, indeed, an extremely small world in which they dwelled in the United States. The resulting stresses, which can lead to mental illness…”(307) Even though Fujianese illegal immigrants have to bear mental illness and stress from life, they also worry about their children’s future. Because of insufficient money, they cannot provide a good education for their children.

“In the United States, many Fujianese children fail to grasp some of the basic concepts that other children have mastered by the time they enter elementary school. Illegal immigrant parents send their children home to China to live with their grandparents in order to save money while in the U.S. When the children eventually return to the United States, they lag behind academically because few people know their language, and their often-illiterate grandparents sometimes neglect their early schooling” (Migration World Magazine).

After suffering hard lives and mental pain in the U.S., Fujianese have different desires for their own future. Some of the people who did not experience extreme frustrating work conditions decided to stay in America: “I believe America is better than China, no matter how you compare the two countries America is a free country with plenty of opportunities” (Chin, 315). Others thought only staying in the U.S. can make their family in China happier and richer: “Since I came here, my family became rich. My parents are happy because they are respected by others. Now, my family members’ sleeves are torn apart by others [meaning, many people in the neighborhood wish to be close to his family]” (Chin, 315). There are some people who desire to go home: “I regret coming to America. It’s hard to find a job; there is a lot of pressure here; and the environment is far worse than in Fuzhou. The hell with Chinatown! It’s even worse than my village. It’s really meaningless to be here” (Chin, 317). But some of them will stay in the U.S. if they can achieve legal status or their conditions can be improved in the U.S: “…I feel like garbage in the United States; there’s no status at all…Here, we sleep on the floor, and we work like slaves. I really regret coming here. At home, I lived and at well, and work was light…” It is hard to say which choice is better for the Fujianese, because it is up to what they want: good lives for themselves or good lives for their family.

Fujianese struggle to survive and fight for money, but all their sufferings sometimes end with death. After paying off his $30,000 debt to the smugglers, Yang Yimei finally could have a little desire for his future, “Life was full of possibilities. He would work hard and buy a restaurant and bring his wife and 7-year-old daughter from Fujian Province to join him. But a month later, a bullet ended that dream. While working in a Chinese take-out restaurant in the Bronx, Mr. Yang, 33, was shot to death during a robbery” (Jane, 1994). There are too many sad stories about the Fujianese American dreams. But we cannot prove coming to the U.S. is the wrong choice for Fujianese, because a lot of Fujianese think that coming to the U.S. is the best way to make their families happy. Despite pain or suffering, if Fujianese think that it is worth it, probably it is really worth it.

Ye, Wenzhen. 1995. "An Analysis of Illegal Immigration from Coastal Region of Fujian Province."