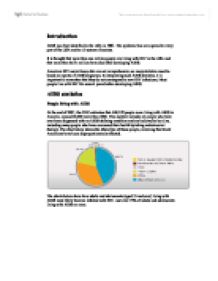 Introduction AIDS was first identified in the USA in 1981. The epidemic has now spread to every part of the USA and to all sectors of society. It is thought that more than one million people are living with HIV in the USA and that more than half a million have died after developing AIDS. American HIV surveillance data are not comprehensive so many statistics must be based on reports of AIDS diagnoses. In interpreting such AIDS statistics, it is important to remember that they do not correspond to new HIV infections. Most people live with HIV for several years before developing AIDS. AIDS statistics People living with AIDS At the end of 2007, the CDC estimates that 468,578 people were living with AIDS in America, around 20,000 more than 2006. This number includes all people who have ever been diagnosed with an AIDS-defining condition and are believed to be alive, including many people who have recovered their health by taking antiretroviral therapy. The chart below shows the ethnicities of these people, revealing that black Americans have been disproportionately affected. The charts below show how adults and adolescents (aged 13 and over) living with AIDS most likely became infected with HIV. Just over 75% of adults and adolescents living with AIDS are men. An estimated 3,792 children aged under 13 were living with AIDS at the end of 2007. ...read more.

HIV statistics At the end of 2007, the CDC estimates that there were 571,378 people living with HIV/AIDS in the 39 states and dependent areas that have a history of confidential name-based HIV reporting, based on reported diagnoses and deaths2. However, the total number of people living in the USA with HIV/AIDS is thought to be around 1.1 million3. The discrepancy between these figures is due to several factors including: * confidential name-based reporting of HIV diagnoses has not yet been implemented in all states4 * anonymous tests, including home tests, are excluded from case reports * one in every five people living with HIV has not even had their infection diagnosed, let alone reported.5 During 2007, there were an estimated 44,084 new diagnoses of HIV infection in the 39 areas with a history of confidential name-based reporting. This is around a 15% increase on 2006 though an actual increase in the number of infections is just one possible reason given by the CDC. Other possible factors include changes to state reporting, an increase in testing, and instability in the data. In the 34 states with a history of confidential name-based reporting, adult or adolescent males accounted for nearly three-quarters of new HIV diagnoses, more than two-thirds of whom were infected by male-to-male sexual contact. Heterosexual contact accounted for 83% of diagnoses among women and 14% among women. ...read more.

This means that AIDS surveillance data are less able to represent trends in the incidence of HIV infection or the impact of the epidemic on the health-care system. In response, more states are now implementing HIV case reporting. This enables state and local areas to better estimate the size of the population living with HIV/AIDS and to predict the services and resources needed. The CDC reports HIV diagnoses and the number of people living with HIV, using only data collected through confidential name-based reporting. By the end of 2006, confidential name-based reporting of adult and child HIV cases had been implemented by 53 states and dependent areas including Puerto Rico, Guam, American Samoa, the Northern Mariana Islands and the US Virgin Islands. Of these 53 areas, only 39 have been reporting since at least 2003. Estimates and reporting delays There is often a delay between the time of diagnosis of HIV or AIDS, or the time of death, and the time at which the event is reported. Moreover, this delay may differ among different categories of people. For this reason the CDC estimates the number of diagnoses, deaths and people living with HIV or AIDS by adjusting for reporting delays, taking into account the differences between categories. The CDC also redistributes cases into exposure categories if none was initially reported. No adjustment is made for incomplete reporting. On this page, all numbers are CDC estimates unless stated otherwise ...read more.