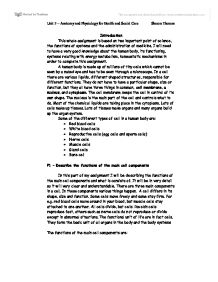 Introduction This whole assignment is based on two important point of science, the functions of systems and the administration of medicine. I will need to have a very good knowledge about the human body, its functioning, systems relating with energy metabolism, homeostatic mechanisms in order to complete this assignment. A human body is made up of millions of tiny cells which cannot be seen by a naked eye and has to be seen through a microscope. In a cell there are various liquids, different shaped structures, responsible for different functions. They do not have to have a particular shape, size or function, but they all have three things in common, cell membrane, a nucleus, and cytoplasm. The cell membrane keeps the cell in control of its own shape. The nucleus is the main part of the cell and controls what to do. Most of the chemical liquids are taking place in the cytoplasm. Lots of cells make up tissues. Lots of tissues make organs and many organs build up the organ system. Some of the different types of cell in a human body are: * Red blood cells * White blood cells * Reproductive cells (egg cells and sperm cells) * Nerve cells * Muscle cells * Gland cells * Bone cell P1 - Describe the functions of the main cell components In this part of my assignment I will be describing the functions of the main cell components and what is consists of. ...read more.

When mitosis is not happening in the cell, the material inside the nucleus, called the chromatin network, appears to be thick and twisted in a bunch. As this happens, a dark round-shaped figure starts to get visible. This is the source to (RNA) ribonucleic acid, one of the nucleic acids. When the cell is in the process of mitosis, the chromatin network divides to form structures called chromosomes. This is the genetic material in the form of DNA- multiple linear. A human cell consists of 23 pairs of chromosomes. These chromosomes contain (DNA) deoxyribonucleic acid. The DNA is responsible for the genetic appearance of an individual. For e.g. our blood group, skin colour etc. The nucleus is responsible for all the actions the cell takes. Cytoplasm: This is a liquid substance that is inside the cell. This is where all the chemical changes take place. The scientific name for all these chemical reactions taking place is called metabolism This liquid consists of various different forms of structures that are known as organelles which perform different jobs inside the cell. One of the very important organelles is called mitochondria (plural mitochondrion). This is involved with releasing energy. The energy is released from the food, which gives the organism the energy to work. A cell may need a lot of mitochondria to perform it jobs. ...read more.

Ribosomes: they are attached to the membrane of the ER. They are responsible to make amino chains and force them in the ER. They are the location of proteins sytesis. They are the formational support and the catalyst for proties synthesis. Lysosomes: these are found in all parts of the cell, like cytoplasm and also the tiny vesicles which are manufactured by the Golgi apparatus. They consist of strong enzymes which are able to absorb all the chemical parts of living cells. Lysosomes can move around the cell liberally and release the substances which are capable of destroying old or damaged organelles or even the whole cell. When the cell take in food the need, It also has a function on destroying bacteria and other unfamiliar substances which enter the cell. Some of the cells like the white blood cells have a lot of lysosomes because their function is to destroy unfamiliar matters which enter the cell, like bacteria, viruses and any other micro-organisms. Chromatin reticulum - this is found in the nucleus of a resting cell. It is a dark, knotted mass. There are two types of chromatin reticulum Euchromatin - these have genes which are regularly put across. The DNA molecules in this are less dense Hetero Chromatin - these have genes which are irregular transcribed. The DNA molecules are more uncondensed Pincytotic vesicle - this is a vesicle for moving fluids from outside the cell to the inside of the cell. Unit 5 - Anatomy and Physiology for Health and Social Care Sharon Thomas ...read more.