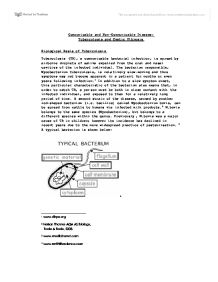 Communicable and Non-Communicable Disease: Tuberculosis and Cystic Fibrosis Biological Basis of Tuberculosis Tuberculosis (TB), a communicable bacterial infection, is spread by airborne droplets of saliva expelled from the oral and nasal cavities of the infected individual. The bacterium responsible, Mycobacterium tuberculosis, is relatively slow-moving and thus symptoms may not become apparent in a patient for months or even years following infection.1 In addition to a slow symptom onset, this particular characteristic of the bacterium also means that, in order to catch TB, a person must be both in close contact with the infected individual, and exposed to them for a relatively long period of time. A second strain of the disease, caused by another rod-shaped bacterium (i.e. bacillus) called Mycobacterium bovis, can be spread from cattle to humans via infected milk products.2 M.bovis belongs to the same species (Mycobacterium), but belongs to a different species within the genus. Previously, M.bovis was a major cause of TB in children; however its incidence has declined in recent years due to the more widespread practice of pasteurisation.3 A typical bacterium is shown below: 4 Suspended within the cytoplasm of M.tuberculosis is a chromosomal loop which carries the bacterium's genetic material. This is encased in a cell membrane, which controls movement of substances in and out of the bacterium, and a thicker cell wall which gives it its integrity. Surrounding the entire bacterium is a slime capsule which offers protection, particularly in terms of serving as a barrier against white blood cells in phagocytosis5, and also aids attachment to other organisms. The bacterium is resistant as a result of this and can survive several weeks after the infected droplets have dried. As with all bacteria, M.tuberculosis is able to survive and reproduce autonomously, with no need for the host cells which viruses require. Although primarily affecting the lungs, the disease has the capacity to spread to many other parts of the body, such as the bones or nervous system, if left untreated6. ...read more.

A lack of knowledge and/or understanding of tuberculosis prevention could be attributed to a number of factors, such as:- * Poor quality/non-existent health promotion campaigns concerning the issue, * A shortage of related media or access to it (for instance due to geographical isolation, e.g. individuals living in parts of the world where educational media is scarce or controlled), * An inadequate or incomplete academic education in the case of some service users. As a result of a deficiency in awareness or understanding, simple means of reducing the risk of contracting tuberculosis - such as the practice of good personal hygiene - are often not carried out, leading to an increase in the prevalence of the disease in the population. It is for this reason that good quality health promotion campaigns play such a vital role in the prevention of TB. Problems may also arise where individuals suffer from mental disease or disorder (for instance the degenerative disease dementia) which affects their ability to make decisions to take the necessary preventative action. The main biological means of tuberculosis prevention is the BCG vaccine. This vaccine is an attenuated strain of M.bovis which acts to stimulate the body's primary immune response to the disease in the form of production of the specific antibodies necessary to destroy it. Once these antibodies have been generated, the body can generate them again more rapidly if/when the patient comes into contact with the infection in a real life setting, and can thus it can be more easily controlled.33 The process of vaccination and how it results in immunity for the individual is shown to the right.34 Vaccinations, grounded in established scientific knowledge, are used all over the world and are a reputable and notoriously effective means of reducing the likelihood of contraction of a given disease. Not only do they provide protection for the individual, they can often also lead to herd immunity as a result of their mass-distributive nature. ...read more.

Currently, CF patients living in England are not entitled to free prescriptions to treat their condition as they are in Wales and Northern Ireland. This is due to the fact that the relevant legislation detailing the conditions/disorders which fall into the 'exempt list' was drawn up in 1968. At this time, cystic fibrosis sufferers invariably died before they reached adulthood, and, as children already received their prescriptions free of charge, it was deemed unnecessary for this particular condition to be put on the list. Thus, with a twelve month prescription currently adding up to �104 charged directly to the service user, and patients requiring this medication for the duration of their lives, it is inevitable that monetary limitations will affect the quality of outcome for some sufferers in acting as a disincentive for those under financial strain. As an inherited disease with no lifestyle risk factors, the prevention of cystic fibrosis essentially amounts to carriers simply not planning pregnancies together. As straightforward as this may seem at face value (particularly with the availability of carrier tests), this means of prevention of course carries with it many social and practical difficulties. First and foremost, despite the availability of the relevant tests, carriers of cystic fibrosis experience no symptoms and therefore often have no idea whether they harbour a faulty CFTR gene or not. This could be due to a lack of individual motivation in terms of actively seeking to get tested. Alternatively, there may be a deficiency in awareness: of the disease in general, or, more specifically, of the existence of carrier tests. Therefore, education in these areas is clearly necessary for the effective prevention of the disease; an obvious way in which this could be achieved is through health promotion campaigns. Even the most powerful programme of education, however, would not eradicate the risk of disease completely, for many reasons. Firstly, many pregnancies are unplanned. Secondly, couples who are aware that they are both carriers may choose to take this risk regardless, in order to bear children together naturally. ...read more.