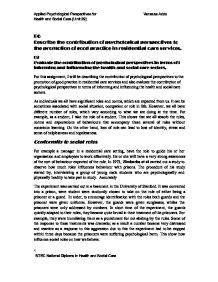 Describe the contribution of psychological perspectives to the promotion of good practice in residential care services.

Another example might be that a resident might asked to walk by themselves but a care worker might thought that it quicker to allow the resident to sit in the wheelchair rather than walk. Although the care worker might have these thoughts, according to the care value base, care workers need to respect the views or the beliefs of service users. So therefore service users should be allowed to walk by themselves, however this is not practical in health and social care sectors due to their lack of time and staff to ensure this implemented. These are some of the reasons why the care value base was implemented. It was set to help care workers promote the rights of clients. It underpins everything that is done in health and social care. Social Identity Prejudice is one of the human behaviour that occurs within us. Is an attitude towards the member of some group on their membership in that group. There many psychological theories which tries to explain the origins of prejudice, which falls into two major categories. Personality theories see the source of prejudice as being in the individual and social psychological theories see it as a result of group membership. An example of a personality theory would be Bandurs's social learning theory, which argues that attitudes such prejudices are learned from role models. In 1971, Tajfel argued that competition is not a important condition for inter-group conflict and unfriendliness. However, he does not deny the importance of competition between groups, personality types as explanation for the origins of prejudice but argues that simple observation of the existence of another group can itself produce discrimination. ...read more.

The humanistic approach has become very useful for health care professionals because it has encouraged psychologist to accept the views that there are more to behaviour that objectively discoverable facts. This promotes a positive approach to human behaviour and one that emphasises individual responsibility. For example, psychologist has understood specific behaviours such mental illnesses and know how to manage such behaviours rather using medications. The problem with mediation is that it only reduces the symptoms of behaviour rather than fully treating the causes of the behaviour, as a result it is likely for the behaviour to reoccur. As a role of a manager in residential care setting is their responsibility to guide their organisation and health care professionals to work effectively. In order for this commences, managers needs to organise a training programme that will enable staff members to operate and support service users. The humanistic approach has also had a great impact on the sort of care provided for older people. For example listening and support service users by not judging their basic needs. The overall, outcome of this has help service users to develop more positive sense of self. For example without making a judgment about whether they are positive or negative. This provides them with the opportunity to explore inspiration, personal growth and self development. It encourages self awareness and self realisation. Concluding this, the aspects of psychological perspective has had a great impact on how we function these days. It has not only educated as in the fields of specific behaviours but also made has understood how we behaviour has individuals. Health and social care professionals are more advanced and skilful when it becomes to challenging behaviours and the aspects of attachment. ...read more.