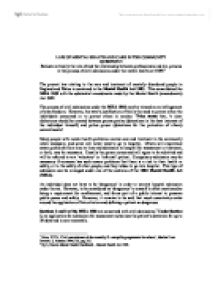 Evaluate critically the role of and the relationship between professionals and lay- persons in the process of civil admissions under the mental health act 1983?

LAW OF MENTAL HEALTH AND CARE IN THE COMMUNITY QUESTION 3 Evaluate critically the role of and the relationship between professionals and lay- persons in the process of civil admissions under the mental health act 1983? The present law relating to the care and treatment of mentally disordered people in England and Wales is contained in the Mental Health Act 1983. This consolidated the MHA 1959 with the substantial amendments made by the Mental Health (amendments) Act 1982. The process of civil admissions under the MHA 1983 may be viewed as an infringement of ones freedom. However, the state's justification of this is the need to protect either the individuals concerned or to protect others in society. 1Price states that; 'a clear dichotomy should be created between parens patriae (detentions in the best interests of the individual himself) and police power (detentions for the protection of others) commitments! Many people with mental health problems receive care and treatment in the community when necessary, and some will never need to go to hospital. Others will experience severe problems from time to time and admission to hospital for assessment or treatment, or both, may be necessary. Usually the person concerned will agree to be admitted and will be referred to as a 'voluntary' or 'informal' patient. ...read more.

They argued that "some relatives may prefer to feel that they are in control of the situation and they will be in the best position to judge when they are unable to cope with the patient." The near relative has a power of veto over an application for treatment, if he or she disagrees with the ASW, unlike the ASW, he or she also has the power to discharge a civil patient from detention. However, discharge from hospital may be prevented if the patient would be likely to act dangerously if they were to be released. However, ASW's may avoid the power of veto by making an application under section 2 before going on to apply for section 3.7 Under Section 29, the ASW or any other relative or any other person with whom the patient is living or was living just before going into hospital may override the wishes of a NR by applying to the County Court for replacement of the NR. The County Court may replace the NR if it finds the NR unreasonable, the case of W v L [1974]8 illustrates this, and here the Court of Appeal used the objective welfare test to make the decision. However, the court may disagree and may not find the NR unreasonable. ...read more.