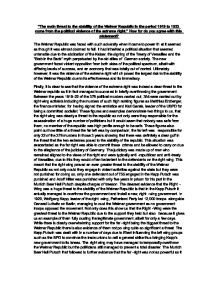 The main threat to the stability of the Weimar Republic in the period 1919 to 1923 came from the political violence of the extreme right. How far do you agree with this statement?

"The main threat to the stability of the Weimar Republic in the period 1919 to 1923 came from the political violence of the extreme right." How far do you agree with this statement? The Weimar Republic was faced with such adversity when it came to power that it seemed as though it was almost doomed to fail. It had inherited a political situation that seemed untenable due to the abdication of the Kaiser, the signing of the Treaty of Versailles and the "Stab in the Back" myth perpetuated by the old elites of German society. The new government faced violent opposition from both sides of the political spectrum, albeit with differing levels of success, and an economy that was totally out of control. Ultimately however, it was the violence of the extreme right which posed the largest risk to the stability of the Weimar Republic due to its effectiveness and its immediacy. Firstly, it is clear to see that the violence of the extreme right was indeed a clear threat to the Weimar republic as it in fact managed to succeed in briefly overthrowing the government. Between the years 1919-22 of the 376 political murders carried out, 354 were carried out by right wing activists including the murders of such high ranking figures as Matthias Erzberger, the finance minister, for having signed the armistice and Karl Gareis, leader of the USPD for being a committed socialist. ...read more.

In contrast, the extreme left, despite seemingly holding the support of a relatively large portion of society was never truly a large threat to the stability of the Weimar Republic. The main group of the extreme left devoted to the overthrow of the Weimar Republic was the KPD (German Communist Party) due to their belief that anything other than a total overthrow of parliamentary democracy would not allow them to fulfil their aims of the creation of a Marxist state. The KPD would seem to be a rather powerful force between 1919-23 as it held the support of up to 15% of the electorate, a relatively significant portion of the population. However, in terms of its ability to genuinely disrupt the Weimar Republic it is clear that it was never a true threat to the stability of Weimar Germany. As we have already seen, it was responsible for only 22 of the 376 political assassinations between the years 1919-23 demonstrating that the far right posed far more of a threat to the Republic. The reason that the extreme left never posed a serious threat to the Weimar Republic was that they could always be crushed due to the opposition of right-wing organisations such as the Freikorps and also due to the Ebert-Groener Agreement signed in November 1918. Due to this the Weimar Republic had two powerful, armed groups always at the ready to put down any left wing uprising. ...read more.

Hyper-inflation had definitely had a huge impact on the stability of the Weimar Republic as it had led to profound changes in the lives of people across society. The poor living conditions is created no doubt led to discontent but it did in fact work in the favour of those who were now able to pay off their mortgages with a day's work for example. The government too had been able to pay off its debts whilst facing an even bigger challenge in paying off war debts to other countries and so we can see that the issue of hyper-inflation was a double-edged sword. In many ways it actually helped the Republic and its people but in the long term it led to an economic situation which was untenable but was not as much of an immediate threat to the safety of the Republic as the violence of far-right groups was proving to be. In conclusion, it seems that the Weimar Republic was placed in an untenable position after the war, facing opposition from both sides of the political spectrum and being undermined by an incredibly weak economy. However, it is true that the threat from the right was the biggest threat to the stability of the Weimar Republic. The extreme left never managed to pose a significant threat, their uprisings were always dealt with easily due to the opposition of the freikorps and the standing army and it was only the right wing extremists led by Kapp that ever managed to legitimately bring the Weimar Republic to its knees. ...read more.