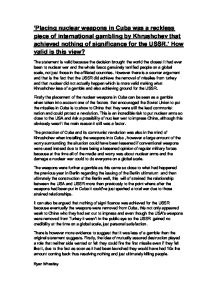 Placing nuclear weapons in Cuba was a reckless piece of international gambling by Khrushchev that achieved nothing of significance for the USSR. How valid is this view?

'Placing nuclear weapons in Cuba was a reckless piece of international gambling by Khrushchev that achieved nothing of significance for the USSR.' How valid is this view? The statement is valid because the decision brought the world the closest it had ever been to nuclear war and the whole fiasco genuinely terrified people on a global scale, not just those in the affiliated countries. However there is a counter argument and that is the fact that the USSR did achieve the removal of missiles from turkey and that nuclear did not actually happen which is more valid making what Khrushchev less of a gamble and also achieving ground for the USSR. Firstly the placement of the nuclear weapons in Cuba can be seen as a gamble when taken into account one of the factors that encouraged the Soviet Union to put the missiles in Cuba is to show to China that they were still the lead communist nation and could protect a revolution. ...read more.

It can also be argued that nothing of significance was achieved for the USSR because eventually the weapons were removed from Cuba, this not only appeared weak to China who they had set out to impress and even though the USA's weapons were removed from Turkey it wasn't in the public eye so the USSR gained no credibility at the time on a global scale, just personal satisfaction. There is however more evidence to suggest that it was less of a gamble than the original statement suggests. Firstly, the idea of mutually assured destruction played a role that neither side wanted or felt they could fire the first missile even if they felt like it, due to the fact as soon as it had been launched they would have had 10x the amount coming back thus resolving nothing and just ultimately killing people. Furthermore the fact that the USSR wanted and were looking for peace and security boasted by the fact they put the missiles into Cuba to protect Cuba and ...read more.

This had been the first time containment had not worked, rollback had failed previously but not containment. The USSR also achieved the removal of the Jupiter missiles from Turkey although not in the fashion they would have wanted due to it being secret to the world which was implemented by Kennedy to spare his own blushes. This helped the USSR's security massively due to it removing the threat of nuclear warheads so close to Russia itself and although wasn't publicised it was an achievement for the USSR. To conclude the statement is valid that it was a gamble by Khrushchev due to the crisis bringing the world the closest it had ever been to nuclear war. However, there is stronger evidence to show that the USSR did achieve something and it was not that much of a gamble, the USA's policy of containment was exposed and the threat of the Jupiter missiles were removed and the idea of mutually assured destruction practically made the chance of nuclear war impossible or if not certainly very unlikely. ?? ?? ?? ?? Ryan Wheatley ...read more.