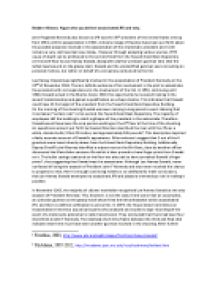 Argue who you believe assassinated JFK and why

﻿Modern History: Argue who you believe assassinated JFK and why. John Fitzgerald Kennedy also known as JFK was the 35th president of the United States serving from 1961 until his assassination in 1963. A diverse range of theories have been put forth about the possible assassins involved in the assassination of the charismatic president and it still remains a very controversial issue today. However through analysing various sources, JFK?S cause of death can be attributed to three shots fired from the Texas School Book Depository on the sixth floor by Lee Harvey Oswald, along with another unknown gunman who shot the lethal head wound on the grassy knoll. Oswald and the unidentified gunman were not acting on personal motives, but rather on behalf of a conspiracy conducted by the CIA. Lee Harvey Oswald was significantly involved in the assassination of President Kennedy on the 22nd of November 1963. There is definite evidence of his involvement in the plot to assassinate the president with correspondence to the involvement of the CIA. In 1956, continuing until 1960, Oswald served in the Marine Corps. With this opportunity he received training in the area of marksmanship and gained a qualification as a sharp shooter. This indicates that Oswald could have hit his target of the president from the Texas School Book Depository Building. ...read more.

This was also the location where a witness named S.M. Holland had observed a puff of smoke at the time of the assassination. Additionally, there is photographical evidence associated with technological analysis of an adult figure positioned behind the fence[4]. Furthermore, the majority of witnesses on the day of the assassination were in assurance that they heard the gunshots from the surroundings of the grassy knoll[5]. When using computer analysis technology and closely observing the eight ? millimetre film shot by Abraham Zapruder[6], we can determine that the first shot missed its target striking the curb near the Triple Underpass and affected the bystander, James Tague, the second shot was fired from behind pursuing Kennedy in the neck. Seconds later, a third bullet hit Connally in his back. The bullet that resulted on Connally was shot from the Texas School Book Depository due to the direction of Connally?s wounds. In less than a second after the third shot, the final shot was admitted and this was the fatally implacable head shot that assassinated JFK. The timing proves there was another gunman, as the Warren report clearly outlines that a time of 2.3 seconds is required to fire two successive shots from an atypical Mannlicher ? Carcano rifle, supposedly used by Oswald[7]and the visualisation of the movements of the president?s head jerking rearward and to the left in the Zapruder film corresponds with the act of another unknown gunman shooting from the direction of the grassy knoll[8]. ...read more.

The lack of preparedness and response is also controversial, as the open limousine, when appearing in front of the Texas School Book Depository slowed down to an almost complete stop, violating standard security regulations[14]. Although the most vital piece of evidence to be recognised is the CIA?s influence in the provision of relatively false evidence to the Warren Commission while subduing other importance evidence, such as the existence of a conspiracy involving the agency and organised crime members.[15] This evidence supports the idea of the CIA?s cover up in premeditation of the assassination of president John F Kennedy. Through the close analysis of sources, acoustical, photographical and computer evidence, the mystery of who is responsible for the assassination of JFK has been discovered. Lee Harvey Oswald is guilty for intending to assassinate JFK from the Texas School Book Depository on the 22nd of November 1963; however it was his unknown accomplice who fired the lethally implacable head shot which caused the death of President Kennedy. The CIA organised the event of the assassination, and therefore, the assassination of John Fitzgerald Kennedy is to be defined as a conspiracy. ________________ [1] Frontline, 2003, http://www.pbs.org/wgbh/pages/frontline/shows/oswald/ [2] McAdams, 1995-2012, http://mcadams.posc.mu.edu/russ/testimony/holland.htm [3] Smikin, 1997, http:// www.spartacus.schoolnet.co.uk/JFKgrassyN.htm [4] McAdams, op cit [5] Marr, no date specified, Crossfire, p 1 -20 [6] Zapruder, 1963, http://www.naa.gov.au/ [7] Austica, no date specified, http://www.jfkmontreal.com/proving _conspiracy.htm [8] Zapruder, op cit [9] Lewinsky, 2010, http://thedaylightest.com/2010/08/25/reasons-why-the-cia-killed-jfk/ [10] No author specified, 1995 ? 2010, http://pbs.org/wgbh/pages/frontline/shows/oswald/cron [11] Marr, op cit [12] ibid [13] ibid [14] ibid [15] ibid ...read more.