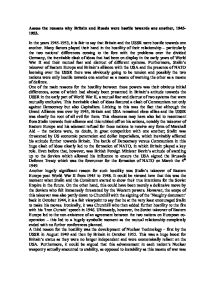 In the years 1945-1953, it is fair to say that Britain and the USSR were hostile towards one another. Many factors played their hand in the hostility of their relationship – particularly the two nations’ differences coming to the fore with the problems over the divided Germany, the inevitable clash of ideas that had been on display in the early years of World War II and their mutual fear and distrust of different systems. Furthermore, Stalin’s takeover of Eastern Europe and Britain’s alliance with the USA and the presence of NATO looming over the USSR there was obviously going to be tension and possibly the two nations were only hostile towards one another as a means of warning the other as a means of defence.

One of the main reasons for the hostility between these powers was their obvious initial differences, some of which had already been presented in Britain’s attitude towards the USSR in the early part of World War II, a mutual fear and distrust of two systems that were mutually exclusive. This inevitable clash of ideas featured a clash of Communism not only against Democracy but also Capitalism. Linking to this was the fact that although the Grand Alliance was over by 1945, Britain and USA remained close allies and the USSR was clearly the root of all evil for them. This closeness may have also led to resentment from Stalin towards their alliance and this rubbed off on his actions, notably the takeover of Eastern Europe and his adamant refusal for these nations to receive any form of Marshall Aid – the nations were, no doubt, in great competition with one another; Stalin was threatened by US economic penetration and dollar imperialism, which inevitably affected his attitude further towards Britain. The battle of Democracy versus Communism in this huge clash of ideas clearly led to the formation of NATO, in which Britain played a key role. Even before that, however, was British Foreign Minister Bevin’s attitude of standing up to the Soviets which allowed his influence to ensure the USA signed the Brussels Defence Treaty which was the forerunner for the formation of NATO on March the 4th 1949.

Another hugely significant reason for such hostility was Stalin’s takeover of Eastern Europe post World War II from 1945 to 1948. It could be viewed here that this was the moment when Stalin and the Comintern started to show their true intentions for the Soviet Empire in the future. On the other hand, this could have been merely a defensive move by the Soviets who felt immensely threatened by the Western powers. However, the scope of this takeover was also partly down to Churchill with the signing of the ‘Naughty document’ back in October 1944, it is a fair viewpoint to say that he at the very least encouraged Stalin to make his moves. Ironically, it was Churchill who then added further hostility to the fire with his ‘Iron Curtain’ speech in 1946. Ultimately, however, the Soviet takeover of Eastern Europe led to the non-existence of an agreement between the two nations on European co-operation – this led to a hugely symbolic moment as the mutual relationship completely ended with no further conferences planned.

A third reason for the hostility was the development of Nuclear Technology – first by the USSR in August 1949 and then by Britain in October 1952. This was a huge boost for Britain’s status as they were no longer independent and were economically reliant on the USA. Furthermore, it could be argued that this advancement in each nation’s Nuclear weaponry actually amounted to stability, as opposed to instability as this means of war was the ‘supreme deterrent’ and could only have been achieved to promote a warning, a means of defence.

Another major cause of this hostility between the two powers was undoubtedly the difficulties over Germany directly after the war. The formation of Bizonia in January 1947 led to much Soviet resentment of the West; this was possibly one of the main causes of the Berlin Blockade which led to the Berlin Airlift, to which Britain contributed 1/3 of overall flights. Britain’s contribution here definitely rattled the Soviets and almost certainly laid a precedent for further hostility in the future. Undoubtedly the introduction of a common currency to Bizonia and West Berlin on June 1st 1948 only helped to escalate the situation. Here, ultimately they were hostile towards one another because they were attempting to implement their own set of beliefs and ideas into their own zone of occupation with entirely different strategies – this led to conflict in which Britain stood firm, for instance the Berlin Airlift.

A further, final set of reasons for the hostility linking in to the theme of Nuclear Technology was the fear of conventional military power. Churchill’s hatred of Communism definitely helped to instil in the British this fear of the Soviet military potential, with the world’s largest conventional force. The idea that Stalin could not be trusted was also most definitely present.

Although there were several key reasons for the raging hostility between Britain and the USSR in the years 1945-1953, it is extremely hard to look past their integral differences in ideas and values for a main cause of this hostility. Were it not for the fear on each side of another power with a completely opposite set of mutually exclusive ideas to ones own then maybe there would never have been hostility in the first place. Furthermore, were it not for Britain’s involvement in NATO and the support of a US regime determined at all costs to contain the spread of Communism, it is easy to look into the eyes of Stalin and look at how he only did actions such as the Eastern European takeover as a means of defence due to the integral fear felt by him and others towards the West.