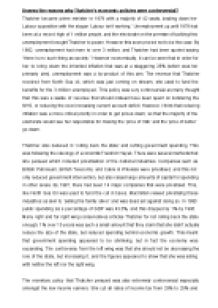 Assess the reasons why Thatchers economic policies were controversial.

﻿Assess the reasons why Thatcher?s economic policies were controversial? Thatcher became prime minister in 1979 with a majority of 42 seats, beating down her Labour opposition with the slogan ?Labour isn?t working.? Unemployment up until 1979 had been at a record high of 1 million people, and the electorate on the premise of tackling this unemployment brought Thatcher to power. However this soon proved not to be the case. By 1982, unemployment had risen to over 3 million, and Thatcher had been quoted saying ?there is no such thing as society.? However economically, it can be seen that in order for her to bring down the inherited inflation that was at a staggering 28% (which was her primarty aim), unemployment was a by-product of this aim. The revenue that Thatcher received from North Sea oil, which was just coming on stream, she used to fund the benefits for the 3 million unemployed. ...read more.

This, like North Sea Oil was used to fund the cut in taxes. Macmillan viewed privatising these industries as akin to ?selling the family silver? and was dead set against doing so. In 1980 public spending as a percentage of GDP was 43.5%, and this dropped by 1% by 1995. Many right and far right wing conservatives criticise Thatcher for not rolling back the state enough, 1% over 15 years was such a small amount that they claim that she didn?t actually reduce the size of the state, but reduced spending behind economic growth. This meant that government spending appeared to be shrinking, but in fact the economy was expanding. The controversy from the left wing was that she should not be decreasing the role of the state, but increasing it, and the figures appeared to show that she was siding with neither the left nor the right wing. ...read more.

I think that the monetary policy she pursued was necessary, because at the time, it was the high earners that were working in the financial services district (Canada water). However the move affected many lower income families, who weren?t seeing a rise in their personal wealth, even with the cuts in income tax. I think that the rolling back of the state was a complete failure because it she did not pursue what her original ideology was. As a result, she was actually reverting back to a ?one nation conservative? that she initially set out to overcome. I think that overall combined, her policies were actually quite successful PLAN Thatcher -Poll tax 1989-1990 - Supply side policies ? nationalising - cutting the government subsidy to the miners - unemployment was at 3.3 million by 1982 - Monetarism cutting direct taxes, and increasing vat. It hit the lowest earners in society harder, ...read more.