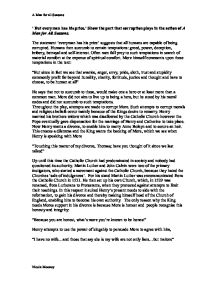 ' But everyman has his price.' Show the part that corruption plays in the action of A Man for All Seasons.

' But everyman has his price.' Show the part that corruption plays in the action of A Man for All Seasons. The statement 'everyman has his price' suggests that all humans are capable of being corrupted. Humans then succumb to certain temptations: greed, power, deception, bribery, betrayal and self-interest. Often men fall prey to such temptations in search of material comfort at the expense of spiritual comfort. More himself comments upon these temptations in the text: "But since in fact we see that avarice, anger, envy, pride, sloth, trust and stupidity commonly profit far beyond humility, charity, fortitude, justice and thought and have to choose, to be human at all" He says that not to succumb to these, would make one a hero or at least more than a common man. More did not aim to live up to being a hero, but he stood by his moral codes and did not succumb to such temptations. Throughout the play, attempts are made to corrupt More. Such attempts to corrupt morals and religious beliefs occur mainly because of the Kings desire to remarry. Henry married his brothers widow which was disallowed by the Catholic Church-however the Pope eventually gave dispensation for the marriage of Henry and Catherine to take place. Now Henry wants a divorce, to enable him to marry Anne Boleyn and to secure an heir. This creates a dilemma and the King wants the backing of More, which we see when Henry is speaking with More "Touching this matter of my divorce, Thomas; have you ...read more.

Alice and Margaret want More to agree with the King and to forget his principles. Their reason for this is for their family safety. Alice tries to convince her husband to capitulate with the King "You can fit the cap to anyone you want" and accuses him of being 'cruel' to the household. More asks Alice to remove his chain: "h**l's fire-God's blood and body no!" "...Is this wisdom to betray your ability, abandon practice, forget your station and your duty to your kin and behave like a printed book!" Alice is scared of loosing her position and becoming a pauper and because of this she tries to corrupt More. More is only human and Alice only wants her husband to do what she feels is best for the family and the country therefore she will not remove the chain. More, though, is acting like 'a printed book' and he will not accept bribes or money from the Church. Margaret knows that Sir Thomas is going to resign anyway and to show her love and respect for her father, she removes the chain although she knows it will lead to her poverty. More feels it necessary to resign because it was his way of resisting severing the connection with Rome and Chapuys encourages Mores resignation saying he could not believe that More 'will allow himself to be associated with the recent actions of King Henry'. More too, does not want to be associated with the corrupted King. ...read more.

because it ultimately would benefit the country. More answers this: "When statesmen forsake their own private conscience for the sake of their own public duties...they lead their country by short route to chaos" More does not agree with Wolsey and even these reasons are unacceptable. Of all the character in the play, More is the only one who does not succumb to corruption. It would have been the easy option for More agree and comply with the King, but the strength of his religious and personal morals meant more to him. He was respected for these attributes and did not want to loose this. He also felt that ultimately God was his judge. This play is about political dalliance rather than fast moving action, "The interval started early in the year 1530 and it's now the middle of May 1532.Two years." It is about corruptive persuasion that More resists and ultimately leads to his execution. This is shown at the beginning of act 2: The political dalliance of the play is instigated by More not giving in to coercion, persuasion or even temptation. Ultimately, according to his own definition, More is a hero: "If we lived in a State where virtue was profitable, common sense would make us good, and greed would make us saintly. And we'd live like animals or angels in the happy land that needs no heroes." He lived up to his rules and the rules of his religion, however unhappy he has made those around him. 'Everyman has his price' except More, or was it his life that was the price he had to pay? A Man for all Seasons Nicola Mooney ...read more.