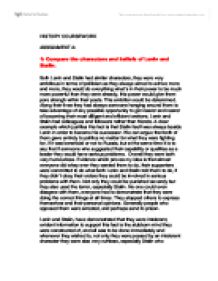 HISTORY COURSEWORK ASSIGNMENT A: 1: Compare the characters and beliefs of Lenin and Stalin. Both Lenin and Stalin had similar characters, they were very ambitious in terms of politician as they always aimed to achive more and more, they would do everything what�s in their power to be much more powerful than they were already, this power would give them pore strengh within their posts. This ambition could be determined. Along their lives they had always someone hanging around them to take advantage of any possible opportunity to get nearer and nearer of becoming their most dilligent and efficient workers. Lenin and Stalin had colleagues and followers rather than friends. A clear example which justifies this fact is that Stalin itself was always beside Lenin in order to become his successor. We can argue that both of them gave entirely to politics no matter for what they were fighting for, if it was beneficial or not to Russia, but at the same time it is to say that if someone who suggested their capability or qualities as a leader they would have serious problems. Overall they were both very humourless. Evidence which proves my idea is that almost everyone did whay ever they wanted them to do, their supporters were committed to do what both Lenin and Stalin told them to do, if they didn�t obey their orders they could be involved in serious problems with them. Not only they could be punished severely but they also used the terror, especially Stalin. No one could even disagree with them, everyone had to demonstrate that they were doing the correct things at all times. They stopped others to express themselves and their personal opinions. Generally people who opposed them were arrested, and perhaps send to prison. Lenin and Stalin, have demonstrated that they were intolerant, evident information to support this fact is the stubborn mind they were constructed of, and all was to be done immediately and whenever they wished to, not only they ...read more.

Apart from all the industrial, agricultural benefits this lead to, one of the main important things was electrification. Electrification was one step forward. Lenin was enthusiastic with the idea of technological innovation and saw electric power as the key to modernising the Soviet Union. He gave a great network of power station which would provide the power for modern large-scale industry. Lenin believed electric power would change things so much that he said that.��Soviet power plus electrification equals Communism.�� Another very important aspect of the NEP was the foreign trade, the NEP encouraged foreign countries, which had refused to trade with Soviet Russia before 1921. Western countries hoped that the move back to private trade and profit - capitalism - meant the failure of Communists ideas. An Anglo - Soviet trade agreement in 1921 marked the beginning of increased trade with the West which gave a great boost to the Soviet economy. There were exchanges of Western industrial goods for the Russians oil and similar products. Thse were some examples which back up the idea that the NEP had been successful. Lenin demonstrated with the April Theses that he would sopport the Bolsheviks for ever. Lenin changed the whole course of the revolution. The Germans were pleased to see him, hoping that he could cause trouble for the Russian government. They gave him money and put him in a special sealed train which the destinaton was Petrograd. The Germans were right. Lenin did cause a stir and he did make trouble. The first thing Lenin did when he arrived was a speech demanding four main issues. He said that there should be no co - operation with the Provisional Government. Lenin demanded that war should be ended immediately. Furtheremore the land should be given to the peasants, and the final point, Lenin had been clear enough to understand his demands, that the Soviets should take power. ...read more.

HISTORY COURSEWORK.RUSSIA 1905-1941 ASSIGNMENT B:OBJECTIVE 3 STALIN:MAN OR MONSTER? 1: Study sources A, B and C. Do these sources give a similar or different impressions of Stalin? Explain your answer. Source A gives the real image of what Stalin�s results had been due to his policies. This source reflects how ambitious and cruel Stalin had reached to be, in order to achieve his proposed aims. Stalin�s main aim was to have control of everyone and everything, no matter how many lives he� sacrified if the final result was beneficial for him. This source is a clear example of what Stalin�s feelings were after his policies had finished.My impression is that Stalin was proud of what he had achieved, he was a man who didn�t mind what problems he had caused to Russia with his policies. Stalin brought to the Russian people a lot of disaster as aconsequence of his unconsciencious thoughts and his selfishness. This source shows Stalin as evil, cruel and like a murderer proud of what he has done, so therefore a monster. Stalin is shown as an arrogant man really proud of his masterpiece and what he had achieved so far. Stalin killed millions of people and he considers it a wonder compared with the pyramid of Egypt. I also deduce from this source that he had blood thirsty and that he�s evilness and cruelty didin�t let him see what was really happening in Russia. It also reflects that he doesn�t feel guilty for all those deaths, who in many cases could have been avoided if Stalin had opened his eyes. Evidence which proves this cruelty with what Stalin was characterised, with the purges he intriduced in 1934. I think that Source A as we may see, shows Stalin�s policies of terror. The two methods Stalin used to encourage people to do what he wanted were the force and persuassion. Sources B and and C are what we call false propaganda. 2: Study source D Does this source provide any useful information about Stalin? Explain your answer. F ...read more.