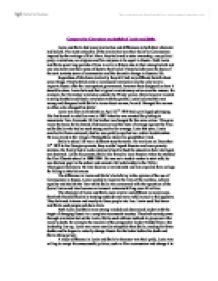 Compare the Characters and beliefs of Lenin and Stalin

Compare the Characters and beliefs of Lenin and Stalin Lenin and Stalin had many similarities and differences in both their character and beliefs. The most noticeable of the similarities was their belief in Communism inspired by the writings of Karl Marx, they believed in state ownership, one political party, revolutions, no religions and for everyone to be equal in Russia. Both Lenin and Stalin spent long periods of time in exile in Siberia due to their strong beliefs and one similarity was their sense of duty to their belief. These beliefs were the basis of the next seventy years of communism and the dramatic change in Russian life. Regardless of this basic similarity, they still had very different beliefs about some things. They both believed a Communist revolution was the only way to improve Russia after the incompetent government, however they disagreed on how it should be done. Lenin believed that a typical revolutionary action was the answer, for example, the November revolution outside the Winter palace. Stalin however wanted to set up brothels and fund a revolution with the profits. Lenin believed this was wrong and disagreed with Stalin's views about women, he said 'changed his women as often as he changed his shirts'. Lenin was born in Simbirsk on April 22nd 1870 had a privileged upbringing. His first breech in rebellion was in 1887 when he was arrested for plotting to assassinate Tsar Alexander III, his brother was hanged for the same crime. This gave Lenin the basis for his hatred of democracy and the taste of revenge against the Tsar, unlike Stalin who had no such strong motive for revenge. Later that year, Lenin enrolled in Kazan university but he was quickly expelled as a radical troublemaker. He was exiled to the village of Kokushkino where his grandfather lived. Stalin's school life was a different story however. He was born on December 21st 1879 to his Georgian parents, they couldn't speak Russian and were poverty stricken, the family had to work extremely hard to fund the education their intelligent son deserved. ...read more.

The end of requisitioning food made the peasants realise it was in their interest to produce as much food as possible so the amount of cultivated land grew by 50% between 1921 and 1927. Lenin's policy also led to the increase of tradesmen that bought and sold, rather than actually make things, these men were called Nepmen, this would never have happened without the NEP and it effected Russia's economy for years to come. The NEP's main long term effect was paving the way for Stalin to build on the agricultural and industrial changes Lenin had started. Stalin followed Lenin and changed the industry and agriculture in Russia dramatically. Lenin admitted he was making a retreat but this was only so they could 'run and leap forward more vigorously', but communism never seemed so far away, how could Russia ever become a socialist country whist the NEP encouraged a minority to become rich at the expense of the majority? Although Russia was economically better in 1924 than in 1917, communism seemed very distant for a supposed communist government. Lenin had taken on Russia as a backward country and it appeared that he had slightly improved the economy and agriculture but for what costs? The unhappiness of the majority of Russian citizens and a future in communism which resulted in millions of deaths. All the changes Lenin made not only had an impact during his life, way after his death, his actions went on to effect Russia. The NEP was still causing the peasant to produce more crops until it reached its maximum in 1927. He started communism government and left future leaders to follow in his footsteps. Would future leaders carry on with the Cheka or the NEP? Or would they go back to War communism and civil war? There are many different opinions of Lenin and how he transformed Russia, some bad and some good, there are mixed opinions because he had mixed effects on people, some people benefited and some people drastically lost out. ...read more.

He killed hardly anybody compared to Stalin and he was a decent man, he wasn't stubborn like Stalin, he could admit to his mistakes and do something about them. One example of this was when war communism wasn't working so he abandoned his plans and set up the NEP instead which was great success. Stalin had far greater impact to Russia and the rest of the world, he was not only involved in changing Russian history but world history too, he was involved with the conferences of Yalta and Potsdam, the arms race with America, the Cuban missile crisis and of course World War II, whereas Lenin had no real experiences of worldwide crisis's. Lenin may have initiated the Russian revolution and transformation into communism and Russia wouldn't be the same without his input but when Stalin took over he did it with far more impact and he took greater, more noticeable and shocking actions to change the face of Russia. He is the more memorable leader having been in power for 29 years and he definitely had more importance. Without Stalin, Russia may have been able to return to life before Lenin. with no real problems, maybe not abolishing communism completely but certainly keeping it at a sensible level causing no harm to the Russian people. Without Stalin there definitely wouldn't have been the drastic changes in Russia and there would without doubt have been millions more people alive with no terrified people sent to labour camps to be punished in appalling conditions. It was a difficult decision deciding who had most impact and importance in Russia but I decided on Stalin purely on the basis that he was such an enormous character being dictator for 29 years and killing over 40 million people. I think he was the nastier of characters lacking any evidence of humanity, he managed to unite all orthodox communists from all over the world and he completely evolved Russia into a completely new country, for the better or worse is debateable. By Lauren Simpson ...read more.