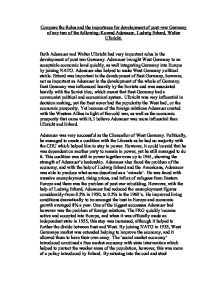 Compare the Roles and the importance for development of post-war Germanyof any two of the following; Konrad Adenauer, Ludwig Erhard, Walter Ulbricht.

Compare the Roles and the importance for development of post-war Germany of any two of the following; Konrad Adenauer, Ludwig Erhard, Walter Ulbricht. Both Adenauer and Walter Ulbricht had very important roles in the development of post war Germany. Adenauer brought West Germany to an acceptable economic level quickly, as well integrating Germany into Europe by joining NATO. Adenauer also helped to make West Germany political stable. Erhard was important in the development of East Germany, however, not as important as Adenauer in the development of the whole of Germany. East Germany was influenced heavily by the Soviets and was associated heavily with the Soviet bloc, which meant that East Germany had a communist political and economical system. Ulbricht was very influential in decision making, yet the East never had the popularity the West had, or the economic prosperity. Yet because of the foreign relations Adenauer created with the Western Allies in light of the cold war, as well as the economic prosperity that came with it, I believe Adenauer was more influential than Ulbricht and Erhard. Adenauer was very successful as the Chancellor of West Germany. Politically, he managed to create a coalition with the Liberals as he had no majority with the CDU which helped him to stay in power. ...read more.

Adenauer's popularity was largely down to the economic success, which we have seen is clearly down to the policies of Erhard and the West's funding, i.e. America. Despite this, Adenauer was still very successful. In contrast to this, Walter Ulbricht was relatively unsuccessful in creating a prosperous East Germany on the scale of which Adenauer managed, which is important as the failure to do so meant the people of East Germany would want to go to the West. One of the key failures of the East was that it often failed to reach the level of economic equality that a communist state entailed. Because of this Ulbricht never gained the support that the West had. By being so closely linked to the USSR also meant the divide between East and West was further increased especially in light of the Cold War. Ulbricht regularly used intimidation and propaganda tactics to establish control which was very similar to n**i methods used before the divide. This was also showed by them gaining control of the police, judicial system as well as using education to reinforce its message. Propaganda was mainly used to ridicule the West, which seemed 'strangely familiar to the n**i regime, despite communism being the very political system Hitler set out to destroy. ...read more.

In conclusion it is clear to see that Adenauer's West Germany was far more prosperous than Ulbricht's East. The development of the East lagged behind the West, mainly due to the diplomatic relations Adenauer created with its western allies. His contribution to the West Germany was incredibly positive, helping to develop and modernise Germany, even if he did it with the help of Erhard and Adenauer. His skills were shown to be greater than Erhard when Erhard replaced Adenauer in 1963 and was forced to resign himself inn 1966 having over reacted to signs of inflation. His East German counterpart failed to reproduce anything like the prosperity of the West in the East, and it was Ulbricht's alliance with the Soviet's that led to the further divide of the two and eventually the Berlin Wall. Historians differ on the two leaders of east and West Germany. Those who were brought up in East Germany were effected by anti capitalist propaganda and the evils of capitalism, therefore critical of Adenauer. Whereas those who were brought up in West Germany had an anti totalitarian ideology, therefore were critical of the east and Ulbricht. Their emphasis would be on the promotion of free democracies and distancing themselves from Nazism. Therefore there are many different interpretations on as to the success of Adenauer and Ulbricht. ...read more.