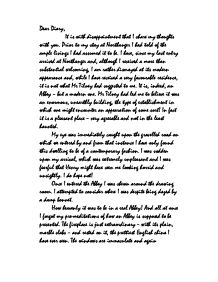 Dear Diary, It is with disappointment that I share my thoughts with you. Prior to my stay at Northanger I had told of the ample livings I had assumed it to be. I have, since my last entry arrived at Northanger and, although I received a more than substantial welcoming, I am rather dismayed at its modern appearance and, while I have received a very favourable residence, it is not what Mr Tilney had suggested to me. It is, indeed, an Abbey - but a modern one. Mr Tilney had led me to believe it was an enormous, unearthly building, the type of establishment in which one might encounter an appearation of some sort! In fact it is a pleasant place - very agreeable and not in the least haunted. My eye was immediately caught upon the gravelled road on which we entered by and from that instance I have only found this dwelling to be of a contemporary fashion. I was sodden upon my arrival, which was extremely unpleasant and I was fearful that Henry might have seen me looking horrid and unsightly. I do hope not! Once I entered the Abbey I was shewn around the drawing room. I attempted to consider where I was despite being dazed by a damp bonnet. How heavenly it was to be in a real Abbey! And all at once I forgot my pre-meditations of how an Abbey is supposed to be presented. ...read more.

As I was readying myself for slumber I happened upon the Japan cabinet I had almost dismissed before. Maybe it was the atmosphere of the night that made it seem more fascinating. As the wind blew stalwartly I attempted to unlock the cabinet. My first attempt established no success so I delved further into the cabinet only to find drawers and another smaller cabinet within. I desperately tried to unlock and release the tiny door, but it seemed that it wouldn't budge. I almost abstained from trying since I was not succeeding, but on one final thrust the door burst open, revealing a scroll of papers. I was so scared -this had been exactly what Henry had foretold just hours before. I looked over to the candle, burning brightly and, feeling rather exceptional at having thought of it, saw that it had hours left to burn. I grabbed it, to bring it closer to the paper and, being far too hasty, I stubbed the wick, leaving me trembling alone in the dark. I shuffled into bed but didn't dare close my eyes - I wanted so dreadfully to examine it but I had to wait until the morning. That night seemed so long and I cannot say I slept much as all I could hear was the storm outside and all I could think of was the papers, which were sat so close. ...read more.

It's a mystery to me. After I returned to the Abbey, I felt the incredible urge to investigate Mrs Tilney's mystery further, so I crept up to the staircase, which Eleanor had said lead to the gallery. I approached it with such caution that I could hear my heart beating rapidly. I opened the doors silently and tiptoed into the room. I was in awe of it for a few moments and I gazed around, dumbfounded at my own rudeness until I had seen the whole room. Just as I decided to leave I heard loud, sudden footsteps. I was petrified! I thought it was the General! I gasped as my eyes fell upon a startled Henry. I was somewhat relieved that it wasn't General Tilney but still incredibly embarrassed. I made my apologies but I couldn't leave - Henry showed me through the corridor and I ran into my room. How embarrassing! I have just got back and I am still blushing now. Whatever must he think of me?! I should wish to forget that quickly though I doubt I will be able to in any such hurry. Furthermore I have still not received any correspondence from Isabella and I am particularly worried for James's sake, as she is probably contemplating meeting Captain Tilney in the Pump Room tonight. Well, I must ready myself for dinner and try to calm down or I shall make a bigger fool of myself than I already have - if that is possible! Catherine xxx ...read more.