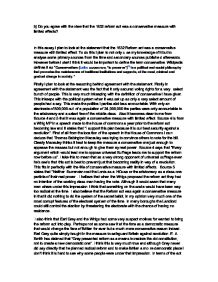 b) Do you agree with the view that the 1832 reform act was a conservative measure with limited effects? In this essay i plan to look at the statement that the 1832 Reform act was a conservative measure with limited effect. To do this i plan to not only use my knowledge of it but to analyse some primary sources from the time and secondary sources published afterwards. However before i start i think it would be important to define the term conservative. Wikipedia defines it as "Conservatism (Latin: conservare, "to preserve")[1] is a political and social philosophy that promotes the maintenance of traditional institutions and supports, at the most, minimal and gradual change in society. " Firstly i plan to look at the reasoning behind agreement with the statement. Firstly in agreement with the statement was the fact that it only secured voting rights for a very select bunch of people. This is very much inkeeping with the definition of conservative i have given. This inkeeps with the political system when it was set up as only a very select amount of people had a say. This made the political parties alot less accountable. With only an electorate of 800,000 out of a population of 24,000,000 the parties were only accountable to the aristocracy and a select few of the middle class. ...read more.

I also think that Earl Grey and the Whigs had some very suspect motives for wanted to bring the reform act into play. Perhaps not as some saw it at the time as a democratic measure that would change the face of Britian for ever but a much more conservative reason indeed. Earl Grey quite simply bought in the measure to safeguard Britain against revolution. E. A. Smith has claimed that "Grey presented reform as a means to restore the old constitution, not to create a new democratic one". I think this is very much true and although Grey never did say directly that he planned radical reform and to make Britian a more democratic place i don't think it is hard to see why some people were under that impression. In terms of the act being a limited measure i think that this statement has alot of merit. The non secret ballot stood as did many Rotten boroughs and out of a population of 24 million only 813,000 people could vote. A very limited effect i think as 1 in 7 men could vote and out of the whole population only 3% of people could vote. In my opinion i think that perhaps the act was designed to be limited. ...read more.

Universal Suffrage. In 1867 and then again later in 1884 the bill was amended and gradually the electorate began to grow. In long term also the Whigs gave way to form the Liberal Democrats, very much the opponents of Conservative measures despite the recent coalition. I can also see that at the time it may not have been seen as having limited effects at all. Such reforms as 36 boroughs with very small electorates were completly disenfranchised, Big industrial towns gained representation, county representation tripled and of course the uniform property qualification the impact on the political system at the time would have seemed pretty massive. In conclusion after analysis of all the sources and using my own knowledge i find myself leaning towards agreement with the statement. I think that in the Short Term it had no real bearing on the political landscape as it was intended too by the aristocracy and in the long term although it can be seen that it set the ball of change rolling i think that without this act the ball of change would have still been set rolling through the perhaps more direct route of revolution. The argument for the other side i find less compelling as an increase of 500,000 to 813,000 out of a population of 24 million, for me fits perfectly with the label of conservative as no real change was made. ...read more.

**
This answer has some good features - the sources, when they are used, are used well, but in a source-based answer, they need to be interrogated and the balance needs to be extracted. The message, purpose and reliability of the sources also need to be challenged in the light of the enquiry.
This answer also needs to be better structured and organised - avoid writing in the first person. In addition, the answer is fairly narrow in its choice of arguments - this is a big topic which essentially in this answer tends to swirl around a conservative measure with limited effects to avoid revolution. It does little to rigorously challenge the proposition and offer more detailed evidence.