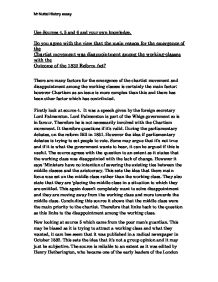 Do you agree with the view that the main reason for the emergence of the Chartist movement was disappointment among the working-classes with the Outcome of the 1832 Reform Act?

Use Sources 4, 5 and 6 and your own knowledge. Do you agree with the view that the main reason for the emergence of the Chartist movement was disappointment among the working-classes with the Outcome of the 1832 Reform Act? There are many factors for the emergence of the chartist movement and disappointment among the working classes is certainly the main factor; however Chartism as an issue is more complex than this and there has been other factor which has contributed. Firstly look at source 4. It was a speech given by the foreign secretary Lord Palmerston. Lord Palmerston is part of the Whigs government so is in favour. Therefore he is not necessarily involved with the Chartism movement. It therefore questions if it's valid. During the parliamentary debates, on the reform Bill in 1831. However the idea if parliamentary debates is trying to set people to vote. ...read more.

This may be biased as it is trying to attract a working class and what they wanted, it cam bee seem that it was published in a radical newspaper in October 1832. This sets the idea that it's not a group opinion and it may just be subjective. The source is reliable to an extent as it was edited by Henry Hetherington, who became one of the early leaders of the London chartist. However they has an inside opinion and could just be his person opinion and doesn't represent the group as a whole. In the source it says that 'they wanted to consolidate the middle class by reinforcement. This sets the idea that it's set of the middle class rather than the working class, which links back to the disappointment. In the source it says that the Whig's aim was not to undermine or even remodel our aristocratic institution. ...read more.

Adding my own knowledge of the emergence of Chartism I can see that the working-class was on the increase in different organisations and there was variations of revolutionary change. This led to the working class having a huge growth in trade unison and they began organising on a national level. The media was also on its side as the poor man's guardian was released. However the charter's people wanted to give the working class a greater voice, using the sixth points. These were universal male suffrages, annual parliamentary elections, secret ballot, equal electrol district, payment of Mp's and abolition of MP's property qualifications. This all links back to the question as it is stating in my knowledge that chartism only was introduced because of the disappointment of the working class. Overall I think it can be seen in the sources and my own knowledge that the disappointment from the working class played a very important role in the emergence of the chartists. I think that if it wasn't for the disappointment of the working class then Chartism would of never occurred. Mr Nuttal History essay ...read more.

This student has partially answered the question but they have structured their essay in the wrong way. They have devoted a paragraph to each source, which is bad because it has encouraged them to say whether or not the sources ...

This student has partially answered the question but they have structured their essay in the wrong way. They have devoted a paragraph to each source, which is bad because it has encouraged them to say whether or not the sources are reliable, when that is not the question. The only time you should do this is if it says so in the question, you are writing an evaluation, or if your teacher says to. Instead, this student could improve by having a section on disappointment among the working classes, then a section on another reason, and a section on another. If the question requires sources, you would need to make sure you quoted each source once, and this would show you were able to combine them with your own analysis instead of just treating them as a list to tick off. Always try to get the sources and your own knowledge into every paragraph, as that way you are answering the question all the way through.

Most of the evidence used is quotes from the sources. This is good in one way, as it is required in the question. However, the question also asks for your own knowledge, so the essay would benefit from the use of more precise evidence that would count under this heading. For example, they could use statistics they have learnt themselves, such as instead of "a huge growth in trade unison" they could say how many new unions there were, if this information is available. This would show that they know what number makes something a "huge growth": without the statistic to prove it, it could actually be a very small number, and this shows a lack of knowledge. The student goes some way towards explaining the evidence. For example, "The idea that they have used the word aristocratic gives the idea that it is probably opposing the questions idea of the working class" takes a word from the source, which shows they have the understanding to pick out the most relevant bits (it should be in quotation marks to show the student didn't write it themselves). They then explain it by linking it to the idea of a disappointed working class from the question. The essay's conclusion is ok because it reaches a judgement, which shows the student can assess the evidence they have used and use it to inform their final opinion. However, the conclusion doesn't consider any of the alternative interpretations, and it would be better to start with something like "Although some interpretations have suggested ____, I think that..." as it shows you are constantly thinking about how there is more than one opinion on the same historical event, and not just treating your opinion as certain.

The essay has a number of spelling mistakes, such as "there" instead of "their" in the second paragraph. It isn't necessary to have perfect spelling but if the examiner spends less time trying to work out what you mean, they can be giving you marks on the quality of your argument and how much knowledge you have instead. The essay also uses "therefore" too much, especially at the start of the second paragraph. This makes the essay sound like a repetitive list - it would be better to learn other words with similar meanings, such as "consequently", which would make the essay sound less repetitive.