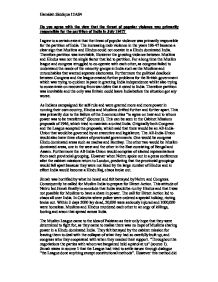 Do you agree with the view that the threat of popular violence was primarily responsible for the partition of India in July 1947?

The Muslim League came to the idea of Pakistan as their only hope that they were determined to fight for, as they came to realise there was no hope of Muslims sharing power in a Hindu dominated India. They felt betrayed by the cabinet mission for leaving them to deal with the collapse of what they had so carefully built up, and congress who they cooperated with when they needed their support. "Throughout the negotiations the parties with whom we bargained held a pistol at us" (source 1). Jinnah states in source 1 that the League had tried to settle issues through dialogue "the League done anything except constitutional methods". However this method did not seem to wok in their favour, as their proposals were never taken seriously by Congress which continued to reject separate electorates for minority groups to be part of the Indian constitution. For example in the 2nd Round Table Conference held in London in 1931, which Gandhi attended as the sole representative of congress, refused to accept separate electorates as a way to protect the voice of minority groups. ...read more.

not because of overwhelming nationalist pressure ", it was one of the reasons that led Mountbatten to conclude that partition was inevitable, as "Congress and the League were in political deadlock" (source 2). Moreover it was not only the Muslim League that had considered a separate state. For example the Cripps mission of 1942 proposed that any province or princely state that wanted to disassociate itself from the new India was free to do so. This clearly indicated that Pakistan was possible. Furthermore the Cabinet Missions proposal of 1946 that divided India into 3 clusters, where two of them would be Muslim dominated areas indicated that Muslims could have their Pakistan within India. In conclusion the threat of popular violence was not primarily responsible for the partition of India, as for a long time before violence broke out, it was clear that Muslims and Hindus would not be able to co-exist within a Hindu dominated India due to their lack of cooperation with each other. This can be seen in their attitudes to the proposals made by the British government in previous missions. The mass murders of Hindus and Muslims became a physical symbol of the Hindu-Muslim division that could not be repaired. Therefore violence only reinforced the idea that partition was inevitable. ?? ?? ?? ?? Hamidah Siddiqua 12AS4 ...read more.