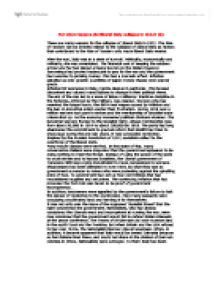 For what reasons did liberal Italy collapse in 1922?

After the war, Italy was in a state of turmoil. Politically, economically and militarily, she was devastated. The financial cost of keeping the soldiers armed and fed had placed a heavy burden on the Italian treasury. Borrowings had proved inadequate to pay for the war and the government had resorted to printing money. This had a dramatic effect. Inflation spiralled as ever greater quantities of paper money chased ever scarcer goods.

Inflation hit everyone in Italy, middle classes in particular. This brewed discontent and caused many Italians to change in their political views.

The end of the war led to a wave of labour militancy. Wartime discipline in the factories, enforced by the military, was relaxed. Workers who had resented the longer hours, the fall in real wages caused by inflation and the ban on industrial action vented their frustration. During 1919 over a million workers took part in strikes and the membership of Socialist trade unions shot up. As the economy worsened political divisions widened. The industrial workers flocked to the Socialist Party, whose membership rose from about 50,000 in 1914 to about 200,000 by 1919. The party had long abandoned the commitment to gradual reform that Giolitti had tried to encourage during the pre-war years. It now advocated revolution. Inspired by the Russian Revolution of 1917, socialists called for the overthrow of the liberal state.

Many middle classes were terrified. In this state of fear, many conservative Italians were disgusted that the government appeared to be doing nothing to meet the threat. Instead of using the power of the state to crush strikes and to harass Socialists, the Liberal government of Francesco Nitti was urging industrialist to make concessions to workers. Shopkeepers had been alienated in June 1919, by what they saw as government surrender to rioters who were protesting against the spiralling price of food. To government had set up food committees that had requisitioned supplies and set prices. The continuing inflation that had provoked the foot riots was taken to be proof of government incompetence.

In addition, landowners were appalled by the government’s failure to halt the spread of revolution to the countryside. Here many peasants were occupying uncultivated land and farming it for themselves.

It was not only over the issue of the supposed ‘Socialist threat’ that the right condemned the government. Nationalists, who had always considered the Liberals weak and incompetent at running the war, were now convinced that the government would fail to defend Italian interests at the peace conference. The Treaty of St Germain did cede Austrian land in the south Tyrol and the Trentino, but when Britain and the USA refused to had over Fiume, the Nationalists blamed Liberal weakness. When, in addition, it became apparent that Italy would be denied Dalmatia because so few Italians lived there, and would not share in the division of German colonies in Africa, Nationalists were outraged. To them Italy had been cheated. Her sacrifices had won only a ‘mutilated peace’, and Liberalism was the culprit!

Demobilised soldiers, struggling to adjust to civilian society and with work difficult to find, saw the peace settlement as a further humiliation. Many ex-officers, in particular, feared that the vibrant, expansionist Italy they had fought for was being undermined by a weak government. Their Italy was falling into the hands of Socialist revolutionaries who had opposed the war from the start and who had done their best to sabotage the war effort. For such men, Liberalism and the parliamentary system had proved abject failures. A powerful, dynamic Italy would have to be achieved by other methods…

Benito Mussolini made political capital out of this disorder. His Popolo d’Italia took every opportunity to exaggerate the socialist threat and to depict Fascists not as violent thugs but as selfless individuals devoted to creating their vision of Italy.

Mussolini’s Political skills were astute. He avoided committing himself to any clear policy and altered his message according to the audience he was addressing. His ability to reassure Liberals proved vital in securing his appointment as PM in October 1922.

The church played a huge role also. The Popolari had withdrawn its support for the Liberals when Giolitti proposed to introduce a tax which would have had the side-effect of hitting the Vatican’s financial investments. Without the tacit support of this Catholic party, with its 107 deputies in parliament, it was now virtually impossible for any government to survive, yet the Popolari were suspicious of the anti-clerical traditions of Liberalism and was willing to destroy any government that offended it.

There was an underlying problem with the system of government itself; Proportional Representation had led to a plethora of disparate parties, and ensured that there was a series of ineffectual coalition governments.  Proportional Representation gave disproportionate power to small, special-interest parties. To make matters worse, the Liberals were divided among themselves. Liberalism was still plagued by factions centred on prominent politicians, notably Giolitti, Salandra, Facta and Orlando, and these leaders actively disliked one another. In such circumstances it was not surprising that the three Italian governments between May 1921 and October 1922 were fragile and unable to introduce the decisive measures needed to cope with the industrial disruption and the collapse of law and order.

Victor Emmanuel III, King of Italy had a huge role in the collapse of Liberal Italy in 1922. The King, who had little love for the existing liberal politicians, thought that politically (bearing in mind the chaos Italy was in), Fascism was not a unattractive option. His decision, during the March on Rome, to withdraw orders for Martial Law, led to the resignation of Facta and Mussolini’s appointment as chancellor.