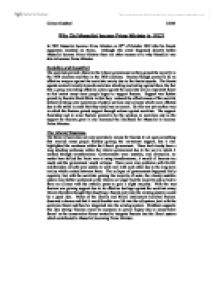 Why Did Mussolini become Prime Minister in 1922?

Why Did Mussolini become Prime Minister in 1922? In 1922 Mussolini became Prime Minister on 29th of October 1922 after his fascist supporters marched on Rome. Although this event happened directly before Mussolini became Prime Minister there are other reasons as to why Mussolini was able to become Prime Minister. Socialists and Squadristi The socialists proved a threat to the Liberal government as they gained the majority in the 1919 elections and then in the 1920 elections. Fascism though proved to be an effective weapon against the socialists mainly due to the fascist squads. The fascist squads reacted violently towards socialism attacking and rioting against them, the fact that a group was taking effective action against the socialists was an important factor as this meant many more people began to support fascism. Support was further gained by fascists Black Shirts in that they reduced the effectiveness of the socialist strikes by taking over operations of public services and railways which were affected due to the strike in order that they could run as normal. So this was yet another way in which the fascism gained support through actions against socialists. The support flourished and to some fascism proved to be the solution to socialism and as the support for fascism grew it also increased the likelihood for Mussolini to become Prime Minister. ...read more.

Mussolini also made the decision to tread the middle line, pushing forward plans for a coup with the March on Rome, but Mussolini also had negotiations with leading liberal politicians as well, taking the diplomatic route. This critical decision to take both courses of action allowed Mussolini to appeal to everyone. The more radicals were satisfied with plans for the coup, the liberals thought that fascism could be trusted and was not as violent as the squads portrayed it to be, and the King himself would have also been in favour of Mussolini and his plans to support the monarchy. Mussolini also was unmoved in his aims of becoming Prime Minister. Mussolini refused lower positions which he was offered stating that he would only accept the premier position, being the post of Prime Minister. Mussolini's stubbornness about only accepting the position of Prime Minister and in treading the middle line, talking diplomatically and planning a coup proved an important and decisive tactic which would be a very important factor in Mussolini becoming Prime Minister. The King The King himself is another factor which enabled Mussolini to become Prime Minister in 1922; this is because during the March the King vetoed the decision to declare martial law. ...read more.

On the King's refusal to declare martial law, the Facta's government resigned. The King asked Salandra to form a new government but Salandra was unable to negotiate with the fascists, even though they were offered cabinet posts, but due to Mussolini only wanting the position of Prime Minister, Salandra declined the position. With no other person wishing to fill the post the King offered it to Mussolini who accepted and on the 29th of October 1922 became Prime Minister of Italy. Although it was finally the King's decision to make Mussolini Prime Minister, which he had to after Luigi's government resigned when the decision to declare martial law was vetoed. However, Mussolini became Prime Minister due to the strength of fascism and his own decisions and speeches. This is because is it was the support which fascism had and its strength over socialism that influenced the Liberals decision to try and integrate fascism into the regime. Mussolini's speeches about supporting the monarchy influenced the King's decision to veto marital law which then led to Mussolini becoming Prime Minister. Without the support fascism had or Mussolini's decisions he would not have achieved the position of Facta so easily. ?? ?? ?? ?? Callum Goddard 2/2/06 ...read more.