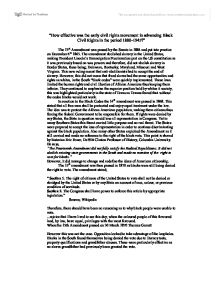 How effective was the early civil rights movement in advancing Black Civil Rights in the period 1880-1945?

"How effective was the early civil rights movement in advancing Black Civil Rights in the period 1880-1945?" The 13th Amendment was passed by the Senate in 1884 and put into practice on December 6th 1865. The amendment abolished slavery in the United States, making President Lincoln's Emancipation Proclamation part on the US constitution as it was previously based on was powers and therefore, did not abolish slavery in Border States, these being; Delaware, Kentucky, Maryland, Missouri and West Virginia. This new ruling meant that anti-abolitionists had to accept the end of slavery. However, this did not mean that freed slaves had the same opportunities and rights as whites, in the South "black codes" were quickly implemented. These laws limited the human rights and civil liberties of African Americas thus keeping them inferior. They continued to emphasise the superior position held by whites it society, this was highlighted particularly in the state of Texas as Texans feared that without the codes blacks would not work. In reaction to the Black Codes the 14th amendment was passed in 1868. ...read more.

When the 15th Amendment passed on 30 March 1870 Thomas Garrett However this was not the case. Opposition looked to take advantage of the loopholes. Blacks in the South found themselves being denied the vote due to literacy tests, property qualifications and grandfather clauses. These were particularly effective as no slaves grandfather had previously been granted the vote. "but most of all was the way in which the Ku Klux Klan and other similar extralegal bodies were by violence and intimidation, preventing n*****s from voting" Everette Swinney Blacks were simply too scared to vote, particularly in the South. Therefore, the amendments highlight that progression was being achieved but at a very slow pace and there were numerous obstacles that were holding back the advancement of the Civil Rights movement. The Jim Crow Laws were created in 1877. The laws essentially denied blacks their civil rights and created a racial atmosphere and unfair equality system across America. Blacks were segregated from whites, including public schools; restaurants; restrooms; public transport and even the military. ...read more.

His reputation rapidly grew; "by 1895 he was recognised as Americas leading spokesman for black people and their concerns" Vivienne Sanders. He inspired many black people to seek education and supported many black enterprises. Washington's "Atlanta compromise" also gained supported from some blacks as he accepted social segregation thus appealing to those who wanted nothing to do with whites. However some felt that slow progress was being made particularly the blacks in the North. Furthermore, he became Presidential advisor for many Presidents. Roosevelt invited Washington to dine at the White House thus becoming the first black to do so. On the other hand, in the North many believed he did more harm than good. One journalist called him "the greatest white mans n****r in the world". " Washington was a sell-out. This view holds that W.E.B. DuBois is a much greater role model than Washington because he urged organizing for fight for equal political, social, and economic rights. Washington knelt before the white man and accepted whatever crumbs the master threw from the table and told his people to do the same." Kelefa Sanneh's W.E.B. DuBois, "The white race cannot survive without dairy products."--Herbert Hoover ?? ?? ?? ?? ...read more.

The student generally has a good understanding of the question and this leads to some relevant analysis of interpretations (see section 2), but there is little mention of the civil rights movement as a collective body. References to Booker T. ...

The student generally has a good understanding of the question and this leads to some relevant analysis of interpretations (see section 2), but there is little mention of the civil rights movement as a collective body. References to Booker T. Washington and so on are good but they come right at the end of the essay. It would make the essay more explicitly related to the idea of the civil rights movement if these topics were dealt with first, because you absolutely have to respond to the question. Examiner's reports in essay-writing subjects sometimes say that it is not allowed to subvert the terms of the question by simply saying no and discussing whatever factors you like: it is best to address the terms of the question first to leave the examiner in no doubt.

The student has a good understanding of the alternative interpretations regarding the civil rights movement, which shows they can think outside the box by not just using one simplistic explanation of what happened. The student uses a wide range of sources, which is good as it proves they are aware of the alternative interpretations (but see section 3 on the essay's problems with referring to them). The student uses precise evidence, but it is sometimes too precise: in the first paragraph, it is not necessary to name all of the five border states because it takes up too much time/too many words - it is history not geography. It would be better to simply say "in the five border states such as Delaware" and then move directly into the analysis, as this way you are using your knowledge as well as saving time/space to analyse it as well. A better use of evidence comes in the first sentence of the second paragraph, when the name of the amendment and the year is used. No conclusion has been reached at all, which is bad because a conclusion is an ideal opportunity to display the advantages and disadvantages of each interpretation, which proves that you understand them. Always allow time in an exam (or word count space in coursework) for a conclusion even if you have to miss out the last sentence of the rest of your essay, because the highest marks are only achieved if you write one. There is also no introduction, and while this is not as necessary as a conclusion, it is useful to write one as it gives you a structure to work with, and if you're pressed for time it can double up as a plan.

The major problem with the quality of this essay's writing is how they quote the sources. Firstly, writing down exactly where you found the source should go at the end of the essay in a bibliography rather than in the essay itself, as it makes the essay look cluttered. However, it is ok to quote and name a historian in the essay itself, as showing you are aware of what other people have argued reflects a sophisticated understanding. So, this student should not have written "Source: Wikipedia" in the essay itself, but it is good that they used "Alex McBride would appear to agree...". (It is not advisable to use Wikipedia because it can be updated by anyone - if using Wikipedia always Google information you find on there to find more reputable websites or ebooks to cite that carry it, and if you can't find any, chances are it's not 100% accurate.) Secondly, instead of "Eric Foner, DeWitt Clinton Professor of History, Columbia University" the student should just say "Foner argued" because the details of where he works adds nothing to an essay that needs historical knowledge, analysis and judgment of interpretations. Thirdly, it always looks impressive to write the sources into your sentence then re-word some of what they say, because it shows you can combine your analysis with other people's interpretations. For example, in the second paragraph, the student could have said: Foner argued that it did not "fully satisfy the Radical Republicans" because it did not address the suffrage issue. The spelling, grammar and punctuation are good but more care needs to be taken with apostrophes - in "no slaves grandfather" slaves needs an apostrophe. The structure is weak as paragraphs are not used well, which makes the student's knowledge look disorganised and probably disorientated the student while they were writing it. On the whole the essay has an appropriate style, and this fluency shows the student understands their ideas, but some sentences - such as "Opposition looked to take advantage of the loopholes" - sound informal because they are so short, which isn't appropriate for an academic work because it is dealing with a serious topic. The essay benefits from using words such as "however", as this is an easy way for them to demonstrate they understand alternative interpretations - something that is crucial to access high marks. It is a good idea to learn a list of these words and phrases (others include "on the other hand" and "alternatively") as it will not only help you to bring in the alternative interpretations, but if you know more than one it will make your essay less repetitive and easier for the examiner to read.