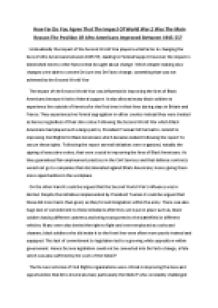 How Far Do You Agree That The Impact Of World War 2 Was The Main Reason The Position Of Afro-Americans Changed?

﻿How Far Do You Agree That The Impact Of World War 2 Was The Main Reason The Position Of Afro-Americans Improved Between 1945-55? Undoubtedly the impact of the Second World War played a vital factor in changing the lives of Afro-Americans between 1945-55, leading to Federal Support however the impact is diminished next to other factors that brought about change. Which despite making slow changes were able to convert De Jure into De Facto change, something that was not achieved by the Second World War The impact of the Second World War was influential in improving the lives of Black Americans because it led to federal support. It also allowed many black soldiers to experience live outside of America for the first time in their lives during stays in Britain and France. They experienced no formal segregation in either country instead they were treated as heroes regardless of their skin colour.Following the Second World War which Black Americans had played such a large part in, President Truman felt he had to commit to improving Civil Rights for Black ...read more.

This was of great signifance in improving the lives of Black Americans as it meant that the clause could no longer be manipulated or interpreted to allow unequal public facilities. In 1955 Brown 2 was taken to court however the ruling to this stated that desegregation in education would occur ?with all deliberate speed.? This limited any improvement that would otherwise have been made as a result of this case as it was too vague to enforce any significant change, demonstrated the same year when fewer than fewer than 10% of schools in the South were desegregated. A large number closed in the following years to prevent them being forced to desegregate .It also led to a greater increase in white opposition on a local level ensuring that De Jure could not be enforced to form a De Facto change. Undoubtedly the use of Direct Action by Civil Rights Organizations was the most important aspect in improving the lives of Afro-Americans as it was able to change De Jure victories into De Facto change. ...read more.

to secure black voting rights, to pass anti-lynching legislation and to end segregated facilities. Truman began to lose support from southern white Democrats, although he had planned to make several changes as a result of ?To Secure These Rights?, he had watered them down considerably by the time of the 1948. Meaning no significant civil rights legislation was implemented during the Truman presidency. Eisenhower refused to comment on the Brown case. He criticised the ruling arguing that it would do nothing to change the hearts and minds of southern white racists he believed that change could not be forced. He claimed that his decision was to make Earl Warren Chief Justice was ?the biggest damned-fool mistake I ever made?. In conclusion, I would say that all of the factors mentioned were hugely limited in providing change in the lives of Black Americans including the impact of the Second World War?s impact. However the use of Direct Action can at least be credited with converting De Jure victories into De Facto change on the ground and the De Jure victories of Civil Rights Organizations such as the NAACP can be credited as being a catalyst for this success. ...read more.