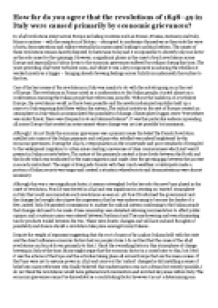 How far do you agree that the revolutions of 184849 in Italy were caused primarily by economic grievances?

﻿How far do you agree that the revolutions of 1848?49 in Italy were caused primarily by economic grievances? In 1848 revolutions swept across Europe including countries such as France, Prussia, Germany and Italy. Many countries ? with the exception of Britain ? attempted to modernize themselves as they rode the wave of riots, demonstrations and rallies eventually (in many cases) leading to political reform. The causes of these revolutions remain heavily disputed by historians today and it is impossible to identify only one factor as the sole cause for the uprisings. However, a significant player in the onset of such revolutions across Europe and especially in Italy is down to the economic grievances suffered by civilians during this time. The years preceding 1848 were turbulent ones, and whilst it was a key component in inducing the rebellion it worked merely as a trigger ? bringing already brewing feelings across Italy from underneath the surface to the fore. ...read more.

Although I do not think the economic grievances was a primary cause the belief the French Revolution instilled into many of the Italian peasants and civilians who rebelled was indeed heightened by the economic grievances. During the 1840?s, overpopulation in the countryside and poor standards of living led to the widespread migration to urban areas creating a new sense of class consciousness which just wasn?t present in Italian society before. The nature of the peninsula created a clear divide between the North and the South which was eradicated by the mass migration and made clear the growing gap between the poorest in society and richest. The anger at living side by side with their much wealthier counterparts made a portion of Italian society very angry and created a situation whereby riots and demonstrations were almost necessary. ...read more.

direct influence economic factors had on people's lives I do not feel that the cause of the 1848 revolutions can be put down primarily to that. I think the overriding factor is this atmosphere of change brewing in Italy at the time. Many might argue that the economic factor is a contributor to this, but I feel it was the actions of the Pope and the activities taking place all across Europe that are the main causes. If the Pope were not to assume power in 1846 and carry out the 'radical' changes he did instilling a sense of belief into many reformers who finally believed that modernization was not a dream but entirely possible, I do not think the revolutions would have gathered such momentum and involved key areas within Italy. The economic grievances cannot be discredited as a contributing factor however it is not a determining one. ...read more.