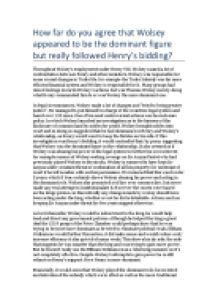 ﻿How far do you agree that Wolsey appeared to be the dominant figure but really followed Henry?s bidding? ________________ Throughout Wolsey?s employment under Henry VIII, Wolsey caused a lot of confrontation between Henry and other ministers. Wolsey was responsible for some crucial changes in Tudor life, for example the Tudor Subsidy was far more efficient financial system and Wolsey is responsible for it. Many groups had mixed feelings towards Wolsey?s actions, but was Thomas Wolsey merely doing what Henry commanded him to or was Wolsey the more dominant one. In legal circumstances, Wolsey made a lot of changes and ?tried to bring greater justice?. He managed to put himself in charge of the countries legal system and heard over 120 cases. One of his most controversial actions was hs enclosure policy. In which Wolsey launched an investigation as to the fairness of the Enclosure of common land by nobles for profit. Wolsey brought nobles into court and in doing so suggested that he had dominance in Henry and Wolsey?s relationship, as Henry would want to keep the Nobles on his side. ...read more.

As lord chancellor Wolsey would be subservient to the king, he would help lead and direct any government policies. Although he helped the king a great deal the 1519 purge of the Privy Chamber could perhaps show that he was trying to become more dominant as he tried to eliminate political rivals. Eltham Ordinances would further this notion, it did make sense and would reduce cost/increase efficiency it also got rid of many rivals. This shows his sly side, the side that suggests he was smarter than the king and was trying to gain more power. But he Doesn?t really use the Eltham Ordinances as a reforming measure so it?s not completely effective. Despite Wolsey?s attempts to gain power he is still reliant on Henry?s support. Here Henry is more dominant. Financially, it would seem that Wolsey played the dominant role; he invented and introduced the subsidy which ws in effect as well as the more traditional fifteenths and tenths. The subsidy was a far more efficient method of taxing as it was more realistic and flexible, it was more relative which made it a lot fairer. ...read more.

In administrative terms Wolsey was never as close as some were to Henry. Wolsey wasn?t allowed into the Privy Chamber which was made up of his most trusted associates, the fact that Wolsey was not a member shows that he was not one of Henry?s most valued so in power terms Henry was always going to be more dominant. Financially, Wolsey was only ever doing Henry?s bidding: raising more money through more efficient taxing systems would be for the King. The amicable grant, which was also for the king but was largely unpopular and caused riots, was for the king. However Henry took all blame for it away from himself; and placed it on Wolsey. Once again showing his dominance. In the legal system Wolsey changed a lot and apparently abused his power for his own needs. But realistically it was all for the King; as the courts were based on the kings person. Although Wolsey did show off his power, he relied on the king as a source of power. Therefore Henry VIII was the more dominant figure and Thomas Wolsey was only doing his bidding. ...read more.