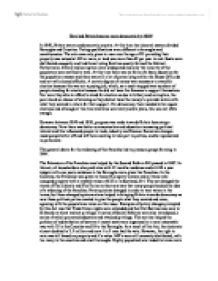 How had Britain become more democratic by 1918?

How had Britain become more democratic by 1918? In 1850, Britain was an undemocratic country. At this time the electoral system divided Boroughs and Counties. Voting qualifications were different in boroughs and constituencies. The vote was only given to men over the age of 21 providing their property was valued at �10 or more, or land was more than �2 per year in rent. Seats were distributed unequally and traditional ruling families usually formed the Cabinet. Furthermore, bribery and corruption were widespread and only the minority of the population were entitled to vote. At this time there was no form of a basic education for the population masses and there was still a lot of power lying within the House Of Lords and not with elected officials. A certain degree of money was necessary to stand for election because this was not a paying job, which, as a result stopped vast numbers of people standing for election because the did not have the finances to support themselves. Nor were they able to afford to stand for election as due to bribery and corruption, the poor stood no chance of winning as they did not have the money to provide voters with what they wanted in return for their support. For democracy, there needed to be regular elections and although at this time elections were every seven years, this was not often enough. ...read more.

Towns with a population between 15,000 and 50,000 lost 1 seat and universities were now allowed only two seats. The country was now divided into single seat constituencies and the number of M.P's rose to 670 from 652. Scotland, who previously had 58 M.P's now had 72. This act meant that power of landlords was reduced even further and the South West was no longer over-represented. The North also gained seats increasing their previous number from a mere 14 to a substantial 58. In 1911, the Liberals introduced the Parliament Act to reduce the power of the House Of Lords. Now, if a bill passed three readings by the House Of Commons it automatically became law and no delay could be put on financial bills. This Act also cut the length of Parliament from 7 years to 5. Now MP's were also being paid an annual wage, so this allowed the poorer classes to become MP's as this was now a paying job. This meant there was now no reason why only the wealthy would be able to stay in the position, as finance was no longer an issue. The Education acts in 1870 set up school boards and provided schools in areas of England and Wales, which previously had none. This allowed more people to receive a basic education. ...read more.

Plural voting was also still an issue in Bringing Britain towards becoming a Democratic Country. Even today there are ongoing arguments about the democratic state of the British Political System. Many argue that our 'First Past The Post' system is undemocratic and think we should operate by means of 'Proportional Representation'. This way even the smallest parties will be represented in some form. Also, would regular referendums not make Britain more democratic because this would allow people to be consulted between elections on important issues? There is also arguments for devolution of power which would certainly bring more democracy to Britain as there would be better representation throughout the country and not only to have the majority of power centred in one of the large towns such as, in today's case, London. This would also mean better representation of ethnic minorities. There is still the issue surrounding the House Of Lords. Many argue for this to be abolished and for more accountability of top Civil Servants. Finally, would democracy not mean a Freedom of Information Act? It seems undemocratic for so much Government Secrecy to exist. As shown, Britain had made vast progress to becoming a democracy between 1850 and 1918, but limitations of each individual act decreased the level of democracy, which was slowly rising in the Political System. In order for Britain to be democratic, all involved had to find a common ground and a great desire for equality and Universal Suffrage. ?? ?? ?? ?? ...read more.