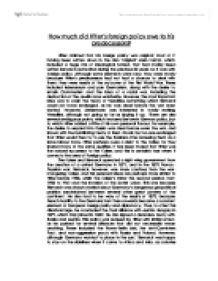 How much did Hitler's foreign policy owe to his predecessors?

How much did Hitler's foreign policy owe to his predecessors? Hitler claimed that his foreign policy was original; most of it having been written down in the also 'original' Mein Kampf, which included a huge mix of ideological hatred, that had mainly been written before in some kind during the previous 50 years. So it was with foreign policy. Although some elements were new, they were mostly because Hitler's predecessors had not had a chance to deal with them; they were results of the outcome of the First World War. These included lebensraum and pan Germanism, along with the desire to smash Communism and the idea of a racial war, including the destruction of the Jewish race worldwide. However, the most important idea was to crush the treaty of Versailles, something which Bismarck could not have envisaged, as he was dead before the war even started. However, Stresemann was interested in totally revising Versailles, although not going so far as ripping it up. There are also several ambiguous points, which featured before in German policy, but to which Hitler added a little of his own personal flavour. For example, the desire to expand into Russia was clear before even the war, and shown with the humiliating treaty of Brest-Litovsk, but no-one envisaged that Hitler would then try to use the Russians after annexing them as a slave labour force. ...read more.

However, although Stresemann had some different policies, this was due to pressure, for he was a right wing fish in a socialist sea. Despite his leanings, though, he was never concerned with racial ideology which so motivated Hitler's conduct. The only man around in the Weimar Republic who had the same leanings as Hitler, was Ludendorff, (who later joined the Nazis) who believed that establishing a large German area in the east at the expense of Russia would give Germany a large hegemonial position in Europe and beyond, from which position Germany would be able to fight a war self-sufficiently, called autarky. However, Stresemann believed Germany had to remain a trading nation and part of the international economic system. After the defeat of 1918, he became more of a realist, with a sharp sense of what could be done within the realm of practical politics. Although hating Versailles, he came to realise Germany could not destroy it by force, (Hitler's aim) but only by collaborating with the Western powers in gradually modifying it. He decided to play Germany's strongest card, her economic importance, should be played in cooperation with the international community, rather than in defiance of it, as some nationalists argued. After his period as chancellor, he remained as foreign minister until his death, deciding to advance by finesse rather than by force. ...read more.

This aroused concern with many of the generals, who tried to warn the British government, but they would not listen. This new aggression was shown by the fact that Hitler was in fact very angry after the Munich conference, for he would have to control himself somewhat until he had chance to strike. He also felt things were rising to a head where a large war would start, and in reality, he would have preferred a 'little war.' The fact that he was willing to make deals with anyone also helped his cause, for the signing of the n**i-soviet pact was of vital importance. Hitler had been helped by the fact that Chamberlain had done everything possible to keep Stalin away from the negotiating table, for he wanted Britain to be the major mediator in European affairs. Therefore, although none of his predecessors' aims were criminal, Hitler did indeed borrow a great deal from them, even Stresemann to an extent. He was helped by the fact that hardly anyone knew that Hitler was indeed serious about his racial policies or the extent he would go to carry them out. In fact, it has been said, that once Hitler was fairly sure that he had lost the military war, he put all his efforts into winning the racial war. Despite the fact that some policies were new, these were mainly because of events that were recent, and so, Hitler, in terms of foreign policy, could definitely be described as a plagiarist. ...read more.