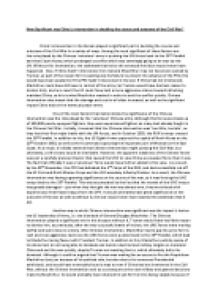 How significant was Chinas intervention in deciding the course and outcome of the Korean War?

﻿How Significant was China?s intervention in deciding the course and outcome of the Civil War? China?s intervention in the Korean played a significant part in deciding the course and outcome of the Civil War in a variety of ways. Among the most significant of these factors are the role played by the Chinese ?volunteer? army in pushing the UN forces back to the 38th Parallel and then South Korea, which prolonged a conflict which was seemingly going to be won by the UN. Without this intervention, the stalemate that led to the eventual Armistice would never have happened. Also, if China hadn?t intervened, then General MacArthur may not have been sacked by Truman, as part of the reason for his sacking was his failure to prevent the advance of the PRC; this would have been academic if the PRC hadn?t intervened in the war. If China had not intervened, MacArthur could have still been in control of the army ( as Truman would have had less reason to dismiss him), and as a result the US could have held a more aggressive stance towards attacking mainland China, as this is what MacArthur wanted in order to end the conflict quickly. Chinese intervention also meant that the damage and cost to all sides increased, as well as the significant impact China had on the eventual peace terms. One of the main factors that demonstrate the significance of the Chinese intervention was the role played by the ?volunteer? Chinese army. ...read more.

In addition to this, MacArthur publicly spoke of his discontent at not being able to blockade and b**b industrial and military targets on mainland China and end the war quickly, despite Truman not wanting him to, which ultimately led to his dismissal. Although it could be argued that Truman was waiting for an excuse to fire the Republican MacArthur (not just because of his political side, but also due to his rumoured Presidential ambitions), and would have eventually found a way to even if China had not intervened in the Civil War, without the Chinese intervention and as a consequence the rash military and general decisions made by MacArthur, he would probably have retained his job for the time being, largely because of his popularity amongst both the public and the Republicans in Congress, but also because of what would have been a successful US intervention in Korea. As a result, assuming MacArthur had kept his job and China had not intervened, MacArthur would have been able to pursue his aggressive tactics in Korea, and probably have been successful quite soon after. Thus, the Chinese intervention had a hugely significant impact on the course and eventual outcome of the war, as without it, it was likely the war would have ended by Christmas 1950 in favour of the UN; rather than being prolonged and ending up in the stalemate which it eventually did. ...read more.

The Korean War totally cost the US 20 Billion Dollars, a value that may have been considerably less had China not intervened and not just prolonged the war, but also made it more difficult for the UNC. It also cost China 2.5 Billion Dollars. Also, almost a quarter of a million South Koreans were killed in action in the Civil War and over 50,000 US troops were also killed. Again, this value would have been lower if the Chinese intervention had not prolonged the course of the war. Overall, the Chinese intervention in the Korean Civil War played a very significant role in deciding both the course and the impact of the War. The most significant factor in their intervention was the 300,000 ?volunteer troops?, which lulled MacArthur?s forces into a false sense of security, before forcing them back to the 38th Parallel. This not only greatly affected the course of the War by prolonging it, but also the outcome; i.e. the intervention ultimately returned Korea to the position it was in at the start, rather than in favour of the ROK. They also unwittingly played a large role in the sacking of General MacArthur, who clearly underestimated them with his almost arrogantly offensive tactics. In addition to this, the role the Chinese intervention played in the peace negotiations was significant, as instead of the UN being able to impose a treaty on North Korea, the Communist forces of China and the North Korea were in a much stronger bargaining position. Rahul Ravi 12SRM ...read more.