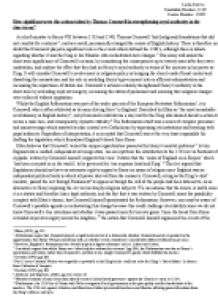 How significant were the actions taken by Thomas Cromwell in strengthening royal authority in the short-term?

﻿Sasha Groves Candidate Number: 1119 Centre Number: 15205 How significant were the actions taken by Thomas Cromwell in strengthening royal authority in the short-term? As chief minister to Henry VIII between 1533 and 1540, Thomas Cromwell ?laid [religious] foundations that did not crumble for centuries?[1], and as a result, permanently changed the course of English history. There is therefore no doubt that Cromwell played a significant role in the events which defined the 1530?s, although there is debate regarding whether it was the King or his Minister who orchestrated such changes.[2] This essay will assess the short-term significance of Cromwell?s actions, by considering the consequences up to twenty years after they were undertaken, and analyse the effect that they had on Henry?s royal authority in terms of the increase in his power as King. It will consider Cromwell?s involvement in religious policy in bringing the church under Royal control and dissolving the monasteries, and his role in moulding Henry?s government into an efficient administration and increasing the importance of statute law. Cromwell?s actions certainly strengthened Henry?s authority in the short-term by extending royal sovereignty, increasing the status of parliament and ensuring that religious changes were enforced without opposition. ...read more.

An extract from Cromwell?s Inspectors at Ramsey Monastery in 1535 makes it clear as to how the poor behaviour of a few monks could be used as a justification to dissolve the monasteries. It states that the ?dormitory is in a state of disrepair? and that the monks ?sometimes shoot arrows in the fields in unbecoming attire?.[19] Cromwell?s enquiry into the monasteries was perhaps intended to prove that the monasteries were corrupt and required reform. Therefore, one must be aware of the possible bias of this contemporary source since elements may be exaggerated in order to ?collect incriminating data that could be used to manipulate Parliament into authorising mandatory dissolution?[20]. An extract from the Dissolution of the Lesser Monasteries Act 1536 further emphasises this notion, suggesting that ?Manifest sin, vicious, carnal and abominable living, is daily used and committed?[21]. This extract is useful for providing an insight into why the monasteries were perhaps dissolved, although it is likely to be biased as Cromwell desired to suppress the monasteries and therefore it may not be wholly reliable since he intended to convince Henry. As evidence shows, Cromwell was of pivotal importance in the dissolution of the monasteries. ...read more.

[13] This allowed Lutheran principles to make their way into the Church and led to the birth of Puritanism. [14] Henry VIII?s Act of Supremacy (1534) ? original text. http://www.britainexpress.com/History/tudor/supremacy-henry-text.htm [15] Scarisbrick, (1968), pg 337 [16] Pollard, (1902), pg 255 [17]Cromwell was appointed as Vicegerent in Spirituals in January 1535. This meant that the power of the church was also passed to a layman (Cromwell) who exercised the extensive powers vested in the Supreme head to make bishops comply with the King?s will. [18] Henry VIII himself was not opposed to monasteries as such but his policy was anti-papal, whereby he saw monasteries as a foci of papal jurisdiction and resistance to the break with Rome. Cromwell on the other hand was anti-monastic and sought abolition on the grounds of superstition (monasteries, shrines, veneration of saints and images, pilgrimages, purgatory). [19] Source D, www.ecclesbourne.derbyshire.sch.uk/ecclesbourne/content/subsites/history/files/Year%2520Seven/The%2520Closing%2520of%2520the%2520Monasteries.doc [20] Quote by Guy, as found in Armstrong, (2008), pg 121 [21] Original text of the Act, http://en.wikipedia.org/wiki/Dissolution_of_the_Lesser_Monasteries_Act [22] Hayward, (2009), pg 254. [23] The royal household tended to breakdown when the King was not active and powerful. Bureaucratic institutions did not depend on the King?s personal efforts and functioned effectively regardless of what the monarch was like. [24] Elton, (1982), pg 238. [25] Elton, (2003), pg 232. [26] http://www.historylearningsite.co.uk/cromwell_law_order.htm [27] Elton, (2003), pg 232. ...read more.