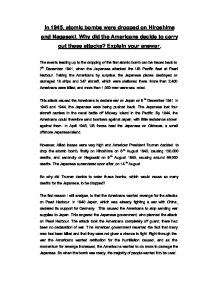 In 1945, atomic bombs were dropped on Hiroshima and Nagasaki. Why did the Americans decide to carry out these attacks? Explain your answer. The events leading up to the dropping of the first atomic b**b can be traced back to 7th December 1941, when the Japanese attacked the US Pacific fleet at Pearl Harbour. Taking the Americans by surprise, the Japanese planes destroyed or damaged 18 ships and 347 aircraft, which were stationed there. More than 2,400 Americans were killed, and more than 1,000 men were wounded. This attack caused the Americans to declare war on Japan on 8th December 1941. In 1943 and 1944, the Japanese were being pushed back. The Japanese lost four aircraft carriers in the naval battle off Midway Island in the Pacific. By 1944, the Americans could therefore send bombers against Japan, with little resistance shown against them. In April 1945, US forces beat the Japanese on Okinawa, a small offshore Japanese island. However, Allied losses were very high and American President Truman decided to drop the atomic b**b, firstly on Hiroshima on 6th August 1945, causing 130,000 deaths, and secondly on Nagasaki on 9th August 1945, causing around 66,000 deaths. The Japanese surrendered soon after, on 14th August. So why did Truman decide to order these bombs, which would cause so many deaths for the Japanese, to be dropped? ...read more.

When Truman was contemplating dropping of the atomic b**b, two bombs were ready to be dropped. Both 'Little Boy' and 'Fat Man' had been tested successfully on 16th July 1945 (the 'Trinity Test'), and the scientists were therefore keen to use them. The costs involved in Manhattan Project ran to $2 billion. As the costs were so high, the money had to be justified to the American public, and so the b**b had to be used - otherwise it would be seen as a waste of money. Just using one b**b, or just doing a demonstration to 'scare' the Japanese into surrender wouldn't have been enough in the minds of the 'Japanese hating' American public. During the Potsdam Conference (17th July to 2nd August 1945), Truman, Churchill, and Stalin met to discuss the rebuilding of Europe, now that Germany had surrendered, and also the current war with Japan. (Attlee took Churchill's place after the election in Britain.) At first, Truman wanted Stalin to declare war on Japan (this Stalin did on 15th August), after which it was planned that American, British and Soviet forces would invade Japan. But while at Potsdam, Truman was told that the atomic b**b had been successfully tested the day before. He now decided that he didn't need help from the Soviet Union after all. ...read more.

They saw the combined sea blockade, conventional bombings, Soviet attack and the atomic b**b as a way to get the result they wanted. This strategy was described by Secretary of War Henry L Stimson as 'maximum force with maximum speed'. Truman was not trying to avoid using the b**b. As Stimson explained after the war, 'No effort was made and none seriously considered to achieve surrender merely in order not to have the b**b.' In addition, showing the destructive power of the b**b would hopefully increase the possibility of preventing future wars. Therefore, having looked at the reasons that I believe caused the Americans to decide that dropping an atomic b**b on Hiroshima and Nagasaki was the best course of action, I can conclude that the main reason was that the atomic b**b was ready for use, and gave the Allies an opportunity to end the war quickly without further American casualties. Though huge Japanese casualties would be the result, other methods would lead to even more casualties. The wish to stop the Soviet Union taking over part of a defeated Japan meat that the decision had to be mad straight away. In my opinion, the main reason for America choosing to drop the atomic b**b, was the reason that Truman, and the Allies wished that the war with Japan would finish quickly, with the least amount of lives lost. bjbjUU -B7|7 ...read more.