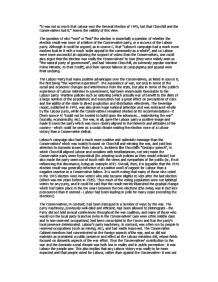 &quot;It was not so much that Labour won the General Election of 1945, but that Churchill and the Conservatives lost it.&quot; Assess the validity of this view.

"It was not so much that Labour won the General Election of 1945, but that Churchill and the Conservatives lost it." Assess the validity of this view. The question of who "won" or "lost" the election is essentially a question of whether the election result was more of a failure of the Conservative party, or a success of the Labour party. Although it could be argued, as in source C, that "Labour's campaign had a much more modern look to it with a much wider appeal to the community as a whole", and so Labour were more successful at capturing the support of voters than the Conservatives, one could also argue that the election was really the Conservatives' to lose (they were widely seen as "the natural party of government", and had Winston Churchill, an extremely popular wartime Prime Minister, to their credit), and their various failures at campaigning and appeal were their undoing. The Labour Party had many positive advantages over the Conservatives, as listed in source B, the first being "the wartime experience". ...read more.

Overall, then, it is arguable that the 1945 election result was generally reflective of a positive swell of support for Labour than a negative reaction to a Conservative failure. It is worth noting that many of those who voted in the 1945 election were new voters who only became eligible to vote after the last election (which was ten years before in 1935). Thus much of the voting population were not habitual voters for any party, and it could be said that the result merely illustrated the gradual change which had taken place in the ten years between the two elections (the swing was in fact less pronounced than it seemed - Labour had been leading in polls for many years preceding the elections). The Conservatives, in contrast, had been damaged in a number of ways by the war. The party machinery, previously well-oiled and efficient, had been allowed to disintegrate - the Party did not hold annual conferences throughout the war coalition, and many of those who would run the local party branches (who in the Conservatives' case were often middle class and in non-reserved occupations) ...read more.

Finally, the proportion of votes to seats was very skewed in favour of Labour, making the victory appear more overwhelming than it was. The Conservatives still gained ten million votes (source A shows) to Labour's twelve million, so it was not the case that the Conservatives had lost a great deal of support by the end of the war - it was more the case that Labour had gained more support; the Conservatives had not been resoundingly defeated - Labour had just managed to beat them. Overall, then, the factors contributing to the 1945 election result can more easily support an opposite view to the one presented, because they portray the vote as a positive one for Labour rather than a negative one for the Conservatives. However, there is no reason why the election could not have been both won by Labour and lost by the Conservatives - indeed, it is hard to see how it could not have been both. ...read more.