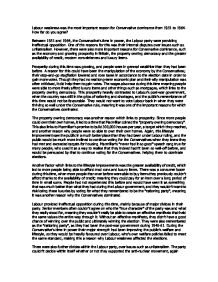 Labour weakness was the most important reason for Conservative dominance from 1951 to 1964. How far do you agree?

Labour weakness was the most important reason for Conservative dominance from 1951 to 1964. How far do you agree? Between 1951 and 1964, the Conservative's time in power, the Labour party were providing ineffectual opposition. One of the reasons for this was their internal disputes over issues such as unilateralism. However, there were also more important reasons for Conservative dominance, such as the economy and growing prosperity in Britain, the property owning democracy and the greater availability of credit, modern conveiniences and luxury items. Prosperity during this time was growing, and people were in general wealthier than they had been before. A reason for this could have been the manipulation of the economy by the Conservatives; their stop-and-go stagflation lowered and rose taxes in accordance to the election date in order to gain more votes. Though they had no real long-term economic plan and their wily manipulation was often criticised, it did help them to gain votes. The wages also rose during this time meaning people were able to more freely afford luxury items and other things such as mortgages, which links to the property owning democracy. ...read more.

Macmillan's "never had it so good" speech rang true for many people, who used it as a way to realise that they indeed hadn't been so well-off before, and would be persuaded by that to continue voting for the Conservatives. helping them to dominate elections. Another factor which links to the lifestyle improvements was the greater availability of credit, which led to more people being able to afford mod cons and luxury items. There was a consumer boom during this time, when more people than ever before were able to buy items they previously couldn't afford thanks to the availability of credit; meaning they could pay for an item over a long period of time in small sums. People had not experienced this before and would have seen it as something that was much better than what they had during the Labour government, and they wouldn't want to risk losing these luxuries by voting for what they remembered to be the "rationing party", meaning it was another reason why the Conservatives dominated. ...read more.

wanted larger trade unions and wanted to work this into their policies, which other members of the party disagreed with. Such strong opposition within the party would have reflected negatively on them as a whole, they came across as unreliable and paired with the Conservative's strength during this time, weak too. This aspect of Labour weakness was another reason for which the Conservatives dominated. Overall, the most important reason for the Conservative dominance was the growing prosperity during this time. It was the most significant as it allowed all the other welfare policies to go forward, and without them, the Conservatives wouldn't have succeeded as they did. It led to a rise in wages and the availability of credit and mortgages, meaning people had more disposable income for luxury items and were more likely to get a mortgage, and therefore own their own house. Without these important welfare changes, the public would likely not have been impressed with the Conservatives, as their government would have been similar to that of post-war Labour, which is why it can be perceived as the most important. Although Labour weakness affected the elections, Conservative strength affected it in a much greater way. ...read more.

This is a very strong response that demonstrates detailed knowledge and stays focused on the question. Both sides of the argument are considered and there is strong evaluation throughout. 5 out of 5 stars.