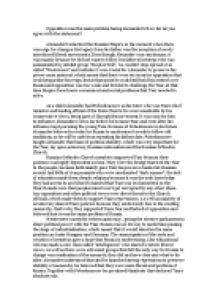 Opposition was the main problem facing Alexander III. How far do you agree with the statement?

﻿Opposition was the main problem facing Alexander3. How far do you agree with the statement? Alexander3 inherited the Russian Empire in the moment when there was urge for changes. His legacy from his father was the inception of newly introduced liberal movements. Even though Alexander was reactionary, it was mainly because he did not want to follow his fathers footsteps who was assassinated by nihilist group ?Peoples Will?, he couldn?t stop spread of so called ?Westerners? and radicals. It was crucial for Alexander to preserve his power as an autocrat, which meant that there were no room for opposition that could jeopardise his reign. But at that point he could still hold his control over Russia and opposition was too weak and divided to challenge the Tsar, at that time Empire faced more economical and social problems that Tsar needed to solve. As a child Alexander had Pobedonoscev as his tutor who was Tsars chief minister and leading official of the State Church. He was remarkable by his conservative views, being part of Slavophiles movement. It was easy for him to influence Alexanders views far before he became Tsar and even after his influence kept pursuing the young Tsar. Because of Pobedonoscevs doctrines Alexander believed in order for Russia to modernise it needs to follow old traditions, so he will be safe from repeating his fathers fate. ...read more.

The other problem that faced Tsar was extremist ?Peoples will?, so the way that Alexander replied to that is creating with the government Stature of State Security. There were special government courts to deal with the political rivals. Their power gave them a possibility to arrest the political enemies without a trial and execute them or exile them to Siberia. Thousands were repressed and mainly they did maintain political stability and destroyed ?Peoples Will?. Even though the aim was achieved and the main threat facing the Tsar did not exist anymore, they stayed until the end of monarchy in 1917. Tsar felt that there was the rapid spread of radical and liberal movements and it created another problem for him in his view. So he took the control of the press, its freedom was restricted. Fourteen major newspapers were banned from 1882-9 for displaying liberal ideas. Okhrana the secret police that Tsar created to do the practical job in preserving the stability also censored all foreign material that Russia imported. They made sure that such political ideologies as democracy and parliamentary government did not reach citizens mind. Even though Alexander thought that he destroyed extremist ?Peoples Will? there was a strong underground movement existing still. ...read more.

The fact that they needed to pay incentives to the government, which were harsh and that majority of Russian land did not give harvest yearly proves the economical instability. Workers had grim conditions and industries were only developed in Urals and textiles in main city. The Tsar did not cope with those main problems because it was important and possible for Russia to maintain same results as Germany and Austro-Hungary. But Tsar was focused on repressions and he thought it was his main problem. He did achieve short-term success in destroying the opposition , but long term effects were more horrifying. The spread of ideas did not stop and the dissatisfaction of the people grew which made his son Nicholas to face it. Also for instance, his repression of Jewish people led to their escape from Russia and create Jewish organisation the Bund, which joined Bolsheviks and made them more powerful. Arresting Lenin and sending him to Siberia for fourteen months made Ulyanov find a lot of supporters and start to create a plot of how to destroy monarchy. Femines and land issue seemed like a b**b that soon would explode, people did tolerate Tsar but to certain extent when they can at least feed their family. Focusing on opposition made Tsar forgetting about other issues in Russia and even though he thought that it was the main problem facing Tsardom he was mistaken. ...read more.