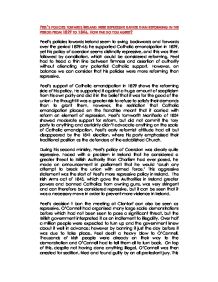 PEEL'S POLICIES TOWARDS IRELAND WERE REPRESSIVE RATHER THAN REFORMING IN THE PERIOD FROM 1829 TO 1846. HOW FAR DO YOU AGREE?

PEEL'S POLICIES TOWARDS IRELAND WERE REPRESSIVE RATHER THAN REFORMING IN THE PERIOD FROM 1829 TO 1846. HOW FAR DO YOU AGREE? Peel's policies towards Ireland seem to swing backwards and forwards over the period 1829-46; he supported Catholic emancipation in 1829, yet his policy of coercion seems distinctly repressive, and this was then followed by conciliation, which could be considered reforming. Peel had to tread a thin line between firmness and assertion of authority without alienating any potential Catholic support. However, on balance we can consider that his policies were more reforming than repressive. Peel's support of Catholic emancipation in 1829 shows the reforming side of his policy. He supported it against a huge amount of scepticism from his own party and did it in the belief that it was for the good of the union - he thought it was a greater risk to refuse to satisfy their demands than to grant them. However, the restriction that Catholic emancipation placed on the franchise meant that it carried with reform an element of repression. ...read more.

This is perhaps the most openly repressive thing that Peel did in the period. This incident proved to be the turning point in O'Connell' political career; despite later being released from prison he never regained his full authority and subsequently his repeal movement began to fall apart. This was a clear victory for Peel's defence of the union, and gave him great support within the Conservative Party. However, Peel was convinced that a population that was more than 80% Catholic could not be coerced indefinitely and in early 1844 asserted that whilst the union itself was still the overriding objective, 'Equality of treatment for Protestant and Catholic Citizens was necessary' so that the Irish middle classes could be persuaded of the benefits of it. Peel's plan of conciliation sought to improve relations and win this crucial support within Ireland. The first step that showed Peel taking a more reforming line was to remove the staunch protestant defender de Gray as Lord Lieutenant of Ireland. He was replaced by Lord Heytesbury, who was happy to follow Peel's policy of giving Catholics equal opportunities in government. ...read more.

However, this was in the face of requests for Catholic colleges from the priests, something that Peel flatly refused to consider. With the coming of the potato famine in 1845, Peel found even greater problems in Ireland, which lead to further reform. Peel's worry about the dependency on the potato was justified, and many people in Ireland were starving. Peel made the decision to try and repeal the Corn Laws. He faced huge opposition from his own party at the suggestion, yet the Bill was passed with Whig support. This is the most reforming one of Peel's policies towards Ireland; however, there is the suggestion that his hand was forced politically. Overall, the evidence suggests that although there were some repressive elements to Peel's Irish policy, namely the period of Coercion, the majority of his policy can be considered as more reforming, as he acted to try and change and improve the conditions in Ireland and the relationships between Britain and Ireland. This is shown by Peel's reasoning that in order to preserve the Union (which was to him the most important matter), the Irish would have to be treated fairly and be shown the benefits of it. ...read more.