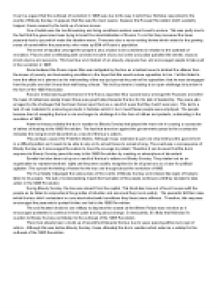 ﻿It can be argued that the outbreak of revolution in 1905 was due to the way in which tsar Nicholas responded to the events of b****y Sunday. It appears that this was the main reason, however the Russian Revolution didn?t suddenly happen; it was caused by the build up of various issues. One of which was the horrific working and living conditions workers were forced to endure. This was partly due to the fact that the government was trying to boost the industrialisation of Russia. To do this they increased the taxes peasants had to pay which made the situation worse. There was also a never-ending famine which added to the growing sense of resent within the peasantry, who made up 80% of Russia?s population. The sense of injustice amongst the people is also a factor to be considered in relation to the outbreak of revolution. ...read more.

They were also enraged by the shortages that had been forced upon them as a result of a war that they hadn?t even won. This led to a lack of raw materials for producing products in factories which in turn meant fewer people were employed. The people became tired of accepting the tsar?s rule and began to challenge it in the form of strikes and protests, culminating in the revolution of 1905. However it was probably the tsar?s reaction to b****y Sunday that played the main role in causing a succession of strikes all leading to the 1905 Revolution. The fact that terrorism against the government spread to the countryside indicates the rising level of discontent as a result of the tsar?s actions. This perhaps caused the Potemkin Mutiny. Although it was restricted to just one ship it still put the government in a difficult position as it needs to be able to rely on its armed forces to remain strong. ...read more.

During b****y Sunday, the tsar was absent from the capital. This illustrates how out of touch he was with the people as he failed to comprehend the gravitas of situation and assumed they?d end quickly. The peasants felt their view, which the tsar didn?t understand or care about what awful conditions they faced, were affirmed. Therefore, this response encouraged the peasants to protest further and led to the 1905 Revolution. The cold hearted choice to use military to disperse the crowds at the Winter Palace was not wise as it encouraged protesters to continue in their quest to bring about change. Consequently, it?s likely that Nicholas II?s reaction to b****y Sunday contributed to the outbreak of the 1905 Revolution. There had already been a build-up of resentment towards the tsar due to years passing without any sign of reform. Although this was before b****y Sunday, it was ultimately the tsar?s reaction which acted as a catalyst in the outbreak of the 1905 Revolution. ...read more.