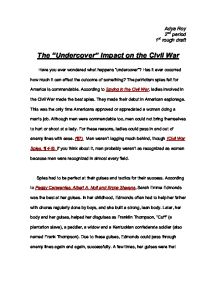 Research paper on Espionage in the US Civil War

Adya Roy 2nd period 1st rough draft The "Undercover" Impact on the Civil War Have you ever wondered what happens "undercover"? Has it ever occurred how much it can affect the outcome of something? The patriotism spies felt for America is commendable. According to Spying in the Civil War, ladies involved in the Civil War made the best spies. They made their debut in American espionage. This was the only time Americans approved or appreciated a woman doing a man's job. Although men were commendable too, men could not bring themselves to hurt or shoot at a lady. For these reasons, ladies could pass in and out of enemy lines with ease. (�7). Men weren't lagging much behind, though (Civil War Spies, � 4-8). If you think about it, men probably weren't as recognized as women because men were recognized in almost every field. Spies had to be perfect at their guises and tactics for their success. According to Peggy Caravantes, Albert A. ...read more.

. (� 4) George Curtis was disguised as a contraband merchant, selling ammunition, for his first mission. That was his means of making his way to Richmond for the actual mission. Also, he got a pass to go through enemy lines from General Hill, so he could provide ammunition for the other side. General Hill often asked favors from Curtis, like delivering dispatches to General Macgruder. Had he known that all the dispatches were reaching Mr. Bangs (Pinkerton's man) first, and then reaching General Macgruder, he might have changed his mind. Due to his perfection at guises, Curtis was never caught, arrested or suspected for involvement in Espionage activities. (� 5) Spies had to lie again and again, with such perfection that they wouldn't be suspected. Spencer Kellogg Brown "was arrested and sent to Fort Pillow, Tennessee. He was released on the impression that he was going to Corinth, Mississippi to join the CSA Army." (Civil War Spies, � 4). ...read more.

Many spies just preferred to smuggle letters or basic necessities, like Elizabeth Van Lew. "Elizabeth was asked to be allowed to visit Union prisoners held by the Confederates in Richmond and began taking them cloths, food, and medicines. While she was there she realized that many of the prisoners had been on the Confederate lines so they had really valuable information about the movements." (Chelsea, Elizabeth Van Lew, � 2) Belle Boyd stuck to carrying important letters and papers across enemy lines. (Chelsea, Belle Boyd, � 1). Sarah Emma Edmonds, disguised as Frank Thompson, was also a mail carrier, appointed by Colonel Orlando. (Caravantes, p. 18. Stevens, p. 46) Spies had to give up everything for their country. Spies often had to lie for the sake of patriotism, and to get off the hook. They had to perfect their skills at their guises, and helped their side of the country by providing information about the battles about to take place. The next time you watch a good movie about spies, just keep in mind, it isn't just a good movie: it is or was someone's life in danger for their country. ...read more.