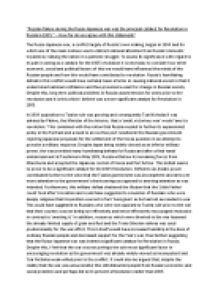 Russian failure during the Russo-Japanese war was the principal catalyst for Revolution in Russia in 1905. How far do you agree with this statement?

Transfer-Encoding: chunked ﻿?Russian failure during the Russo-Japanese war was the principal catalyst for Revolution in Russia in 1905.? ? How far do you agree with this statement? The Russo-Japanese war, a conflict largely of Russia?s own making, began in 1904 and for which one of the main motives was to distract national attention from Russia?s domestic troubles by rallying the nation in a patriotic struggle. To assess its significance with regard to its part in acting as a catalyst for the 1905 revolution it is necessary to consider how other economic, social and political factors of this era would have influenced the minds of the Russian people and how this would have contributed to revolution. Russia?s humiliating defeat in this conflict would have certainly been a factor in causing national unrest in that it undermined national confidence and thus provoked a want for change in Russian society. Despite this, long term political problems in Russia caused tension for years prior to the revolution and it is this which I believe was a more significant catalyst for Revolution in 1905. In 1904 opposition to Tsarist rule was growing and consequently Tsar Nicholas II was advised by Plehve, the Minister of the Interior, that a ?small, victorious war? would ?avert a revolution.? This combined with the notion that Russia needed to further its expansionist policy in the Far East and a need to an ice-free port resulted in the Russian government rejecting Japanese proposals for the settlement of the Korea question in an attempt to provoke a military response. ...read more.

Sergei Witte, a highly influential Russian policy-maker, supported State Capitalism through which he believed modernisation could be achieved. He imposed heavy taxes and high interest rates at home in Russia and limited the import of foreign goods. Despite the fact that Witte?s aim of modernisation and urbanisation was largely achieved, this resulted in consumers being penalised as they had to pay the higher prices traders introduced and prices tended to rise as a result of tariffs making goods scarcer. The Trans-Siberian railway which Witte pioneered encouraged connection between the remote central and Eastern Empire and the industrial west, which in turn encouraged the migration of industrial workers to cities to work in factories. However, the living conditions in these factories were often appalling and thus it could be said that this contributed the emergence of events relating to the revolution such as Bloody Sunday, as they provided hardship which promoted social unrest. Moreover, he paid no attention to Russia?s agricultural needs, thus neglecting many of Russia?s peasants who lived in hardship and it could be said this further contributed to social agitation. Although it is certain that Witte?s Economic Reform did have positive benefits, it did also undoubtedly have negative impacts in Russia which could be said to have contributed to the Revolution. When comparing Russia?s humiliating defeat in the Russo-Japanese war to the negative effects of Witte?s economic reform, I would agree with the statement in that I feel Russia?s maritime defeat was a more significant catalyst for revolution than economic reform. ...read more.

The long term effects of mistrust in the Tsar?s government policies and the opportunity this provided for revolutionary groups to inspire a vision of change seem to have provided the basis and thus principal catalyst for Revolution, whereas the end to the Russo-Japanese war seems to have come at a convenient time which provided a final force to ignite Revolution. To conclude, it is my belief that the principal catalyst and predominant reason for Revolution in Russia in 1905 was in fact a combination of political factors leading to social unrest, as opposed to Russian failure during the Russo-Japanese war. Having said this, the war was indeed important in that it came at a crucial time for igniting revolution. These political reasons for agitation in Russia, including a dislike of the Tsarist government, affected many members of society which allowed revolutionary groups to essentially inspire revolution. Although Witte?s economic reform could be said to play a part in political issues given his high position in government, alone I believe that reform brought more prosperity to Russia and was a just attempt to avert Revolution. Finally, with regards to Russia?s failure in the Russo-Japanese war having been a principal catalyst for Revolution in 1905, I feel that although humiliating for Russia, it wouldn?t have had such a significant effect as it seems to without Russia?s economic and political issues alongside it and thus was not the principal catalyst. ...read more.