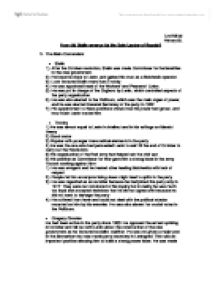 Urvi Mittal History SL How did Stalin emerge As the Sole Leader of Russia? 1. The Main Contenders: * Stalin 1) After the October revolution, Stalin was made Commissar for Nationalities in the new government. 2) He became close to Lenin, and gained his trust as a Bolshevik operator. 3) Luck favoured Stalin more than Trotsky. 4) He was appointed head of the Workers' and Peasants' Union. 5) He was put in charge of the Orgburo by Lenin, which controlled aspects of the party organization. 6) He was also elected to the Politburo, which was the main organ of power, and he was elected General Secretary of the party in 1922. 7) His appointment to these positions shows how his power had grown, and how much Lenin trusted him. * Trotsky 1) He was almost equal to Lenin in intellect and in his writings on Marxist theory. 2) Good orator 3) Popular with younger more radical elements in the party. 4) He was the one who had persuaded Lenin to wait till the end of October to carry out the Revolution. 5) His organization of the Red army had helped win the civil war. 6) His position as Commissar for War gave him a strong base in the army. Factors working against him- 1) ...read more.

They feared a dictator could emerge to take control of the centralized state which had developed by 1924. They feared Trotsky as he was in a powerful position as commander of the Red Army. After Lenin's death they were concerned about the unity of the party, as unity was needed to turn the population into socialists. They therefore could not afford a leader who might cause splits amongst the party and it was Trotsky who they feared might do this. 2) The NEP and industrialization debate. The issue that was debated was how the economy should be run. They agreed that by industrialization they would create a large class of proletarian workers which would help the road to socialism. The NEP was hindering the progress to socialism as it was intensifying the difference between rich and poor as well as leading to gambling and prostitution. Also after 1925 there were serious problems. They could not agree from where the resources to carry on industry which had reached its pre- 1913 level would come from. There was unemployment amongst workers. Their wages did not keep pace with the rising prices of consumer goods. Food shortages began to reappear. All the party members had only accepted the NEP as a temporary system but the debate was when and how it should be ended. ...read more.

Also, Trotsky did not go out of the way to develop or build up his power base, and therefore Stalin was able to erode the one he had already built up. Like all the other contenders, he too underestimated Stalin, and therefore was easily outsmarted by him, since he was perceived as dull and mediocre, therefore no one saw him as a great threat until it was too late, when he was determined to protect his power base, and make sure he was not ousted. 7. Trotsky's weaknesses and errors of judgment were crucial in his defeat, since he was not witnessed as a loyal member of the party, having joined only in 1917; many thought he may try to become a dictator. Also, he was high minded and arrogant, dismissive of his colleagues. He was respected, but he did not engender affection or personal loyalty. He was perceived as the one most likely to cause splits in the party. Also, he did not like getting involved in the 'drudgery of politics'. He was not good at political intrigue, making alliances and trade-offs. 8. Stalin was vastly underestimated by his opponents, seen as only a 'grey blur', so by the time they realized what a great threat he was, it was too late. He had already established himself as a contender, one of the most dangerous ones as well as most likely to succeed, in the power struggle. ...read more.