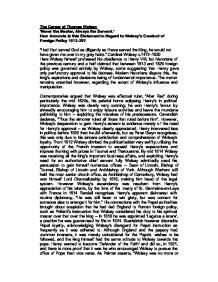 ‘Never the Master, Always the Servant.’

How Accurate is this Statement in Regard to Wolsey’s Conduct of Foreign Policy 1513-29?

“Had I but served God as diligently as I have served the King, he would not have given me over in my grey hairs.” Cardinal Wolsey c.1472-1530

Here Wolsey himself professed his obedience to Henry VIII, but historians of the previous century and a half claimed that between 1513 and 1529 foreign policy was governed entirely by Wolsey, some suggesting that Henry gave only perfunctory approval to his decrees. Modern historians dispute this, the king’s aspirations and decisions being of fundamental importance. The matter remains unsettled however, regarding the extent of Wolsey’s influence and manipulation.

Contemporaries argued that Wolsey was effectual ruler, “Alter Rex” during particularly the mid 1520s, his palatial home eclipsing Henry’s in political importance. Wolsey was clearly very cunning; he won Henry’s favour by shrewdly encouraging him to enjoy leisure activities and leave the mundane politicking to him – exploiting the mistakes of his predecessors. Cavendish declares, “Thus the almoner ruled all those that ruled before him”. However, Wolsey's desperation to gain Henry’s esteem is evidence merely of the need for Henry’s approval – as Wolsey clearly appreciated. Henry intervened less in politics before 1529 than he did afterwards, but as Peter Gwyn recognises; this was only due to his sincere satisfaction and comprehension of Wolsey's loyalty. From 1512 Wolsey climbed the political ladder very swiftly; utilising the opportunity of the French invasion to exceed Henry’s expectations and impress the king with prizes in Tournai and Therouanne. By mid 1514 Wolsey was receiving all the king’s important business affairs, and exploiting Henry’s need for an authoritative chief servant fully Wolsey admittedly used his persuasion to gain himself numerous offices – Dean of Lincoln, Bishop of Tournai, Bishop of Lincoln and Archbishop of York. Although Warham still held the most senior church office, as Archbishop of Canterbury, Wolsey had won himself Lord Chancellorship by 1518, making him head of the legal system. However Wolsey's ascendancy was resultant from Henry’s appreciation of his talents, by the time of the treaty of St. Germaine-en-Laye with France in 1514 Randell recognises Henry’s apparent disinterest with routine diplomacy, “He was still keen to win glory, but was content for someone else to arrange it for him.” His connections with the Papal authorities brought about suspicion that he had tied England to Roman foreign policy, such as Pollard’s insinuation that Wolsey considered his duty to his spiritual master over that over the king – In 1518 he was appointed ‘Legatus a latere’, a position he was guaranteed for life in 1524. Scarisbrick however discredits Papal loyalty, acknowledging Wolsey's disregard for Papal instruction as frequently as it was adhered to. Although England and the papacy had common interests, it was merely coincidental for the Pope’s wishes to be followed, and the king himself had the same attitude to Wolsey towards the pope. Henry wanted to become ‘Defender of the Faith’ and did so, in 1521, and there is more proof that it was he who encouraged Wolsey to pursue the office of Pope than vice versa. As Palmer asserts, “Wolsey was no more or less a servant of the Papacy than Henry himself.” Wosley required the position of ‘Prince of the Church’ (gained 1515) because he had not won such approval from the Papcy as he had from his royal master. He did not wish to rival Henry’s authority by becoming ‘Prince of the State’ because he was assured of Henry’s support. Although Wolsey bragged of being “author of the peace” at the Treaty of London in 1518, and despite evidence for him formulating his own policies by 1517; as Gwyn defends – he was winning glory for his master. Scarisbrick recognises Wolsey's desire to become arbiter of Europe, but his dependence upon Henry is undeniable. As Randell recognises, Wolsey often hid things from Henry and considered ways in which he could put things to him in order to provoke a desired response, to push contenders away and get away with more than he officially should. Vergil even suggested that Wolsey bribed Henry with gifts to distract him whilst he was making demands and to gain further favour. All these efforts, however, merely emphasize Wolsey's dependence upon the king and his desperation to maintain his support. Randell suggests that Wolsey made independent decisions – often trivial but sometimes-major ones, but Henry could and sometimes did intervene. Wolsey always needed to appear to be implementing Henry’s decisions even if it was not always strictly the case. Skelton and Palsgrave, authors of articles in the House of Lords December 1929 attacked Wolsey's arrogance and misrule during parliament and regarding matters of foreign policy, alleging he bestowed himself excess authority and wrongfully excluded other councillors from attending court, but evidence suggests that they were pursuing a ruthless campaign to get him dismissed. Although, as Guy points out, up until 1927 “more than the details were left to Wolsey” Henry was nevertheless broadly responsible throughout all matters of foreign policy.

Wolsey may have organised much of the minor details, such as the essential transport arrangements and food supplies during invasions, but it was under Henry’s direction and command. The king would instruct Wolsey and provide details of the task, which Wolsey undeniably fulfilled exceptionally and often made fitting amendments to Henry’s broader schemes.

Henry’s certain dominance was clear throughout a number of issues. In 1518 Henry backed the Holy Roman Emperor despite Wolsey's disproval and efforts to persuade him oppositely. Scarisbrick identifies disparagement between Henry and Wolsey throughout the events of 1520 and 1521; the Field of the Cloth of Gold in 1520 was extremely expensive and Wolsey discouraged Henry from spending such vast amounts of money on what he anticipated to be a political fiasco, yet the event went ahead with no expenses spared – regardless of Wolsey's advice. In 1521 Wolsey wanted peace in contrast to Henry’s desire for warfare, but Wolsey was made to journey around Europe; negotiating with Charles in Bruges that England and Spain should ally against France, and then returning to Calais. His consolation being that war would be delayed until 1522 – but Henry’s leadership is clear, the attack was still launched and Wolsey left disregarded once more. As Gwyn appreciates, Wolsey realised the importance of bringing honour to his master through dominating affairs – which his desired neutrality would not bring. Wolsey deceived France against his own wishes to preserve Henry’s major international role. In 1525 the Battle of Pavia saw the capture of King Francis and the strengthening of Henry's desire to become Imperial Ruler. Wolsey was then unable to act as an Imperial Arbitrator, Henry VIII wanted an Imperial Alliance and Wolsey was forced to attempt the Amicable Grant for Henry to invade France, but this was impossible and in August the Treaty of the More was signed after the French war. The reversal was extremely embarrassing for Wolsey, who went through humiliation and dispute to please Henry VIII, eventually gaining an annual pension of 100000 gold crowns. Historian Dana Scott Campbell understands Wolsey as being motivated to tread the path necessary to ensure personal advancement and power in England. By satisfying Henry VIII with international glory and prestige his support was ensured; although his power was enhanced by the Papal authorities, Roman influence was limited – his self interest, over all else, forced him to please Henry primarily and the Pope if possible. He acted with more alacrity for Henry, and with more determination, joining the Anti-Imperial League of Cognac in 1526 and declaring war two years later. The Treaty of Cambrai in 1529 was a desperate attempt by Wolsey to retain Henry’s partiality, and was signed by the leaders of England, France and the Holy Roman Empire.

Wolsey underwent mortification and infringement of his own desires in order to please his King, both in the matters which he may have seem to control and in those which were quite obviously of Henry’s design. Whether due to arrogance and untamed ambition or merely a desire to satisfy the King – Wolsey routinely aimed to please him in all aspects of foreign policy.

Grossel appreciates Wolsey's desire to serve the king; convictions in Wolsey's vanity are now outdated as Wolsey clearly wanted to maintain the honour and influence of his own position through that of his king. Henry’s absolute dominance is evidenced by the impossibility of Wolsey sustaining esteem as European Arbitrator because of Henry’s belligerence (as well as the treachery of the European Kings). His independent decisions occurred only when permitted, or occasionally unknown, by Henry. Wolsey's position was secured for the most part because of Henry’s satisfaction with his conduct – had it not been so (as in later years) Wolsey would have been rapidly dismissed. However, Randell recognises that the evidence for both supporting and admonishing Wolsey's loyalty is in the form of letters written only to deceive the recipients, disparate word of mouth and untrustworthy third parties – all of it unreliable.