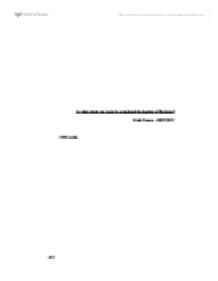 To what extent can Lenin be considered the begetter of Stalinism? Frank Carson - 4002/10512

To what extent can Lenin be considered the begetter of Stalinism? Frank Carson - 4002/10512 2 836 words In order to establish whether Lenin did, indeed beget Stalinism, two questions need to be answered; what were Lenin's plans for the future of Russia and what exactly gave rise to Stalinism? Official Soviet historians of the time at which Stalin was in power would have argued that each one answers the other. Similarly, Western historians saw Lenin as an important figure in the establishment of Stalin's socialist state. This can be partly attributed to the prevailing current of pro-Stalin anti-Hitler sentiments amongst westerners until the outbreak of the cold war. As relations changed between Russia and the rest of the world, so did the main historical schools of thought. Following Stalins death, hostilities between the capitalist powers and the USSR, along with an increased awareness of the atrocities that were previously hidden and ignored, led to a split in the opinions of Soviet and Western Liberal historians. In Russia, he was seen, as Trotsky had always maintained, as a betrayer of the revolution, therefore as much distance as possible was placed between himself and Lenin in the schoolbooks of the 50s and early 60s in the USSR. These historians point to Stalin's killing of fellow communists as a marked difference between himself and his predecessor. Trotsky himself remarked that 'The present purge draws between Bolshevism and Stalinism... a whole river of blood'1. Liberal Western historians such as Richard Pipes, who himself was an advisor to President Reagan, drew lines of direct continuity between the two leaders, emphasising Lenin's use of terror and bans on factionalism which allowed Stalin to come to power. ...read more.

Lenin, who is described by Edward Acton as the first soviet historian, was himself the creator of democratic centralism. He saw it as a genuine opportunity for party members to have their views heard and according to his followers, it was his charisma, persuasiveness and strength of opinion that resulted in his prominence. If Lenin was an authoritarian leader, his personal rule over the party paled in insignificance when compared with Stalin's destruction effective of party rule. Between the years 1936-1939, he had more than 1 million party members removed from office or killed. A clear difference in Lenin and Stalin's approaches to foreign policy is visible, as Stalin adopted a policy of 'Socialism in one country', whilst Lenin hoped for and indeed expected international revolution. Marx argued that proletarian revolution would occur first in countries that had experienced industrial revolution, creating a bourgeois class and reaching an advanced stage of capitalism. Lenin adapted this theory and attempted to apply it to backwards Russia, thinking that Revolution in Russia would trigger international revolution. This would leave socialist Russia surrounded by other communist friendly nations who would then come to Russia's aid and bring her alongside more advanced countries. This idea manifested itself in 1919, when he sent Bolshevik armies to 'liberate' the people of Poland. The fact that this was met with little enthusiasm, if not open hostility, shed new light on Lenin's theory. The fact that post-war revolutions in other countries either were crushed or did not occur at all raise the question as to whether Stalin's foreign policy was merely a response to the international system that had been created or an expression of his own will, as Western Liberals would argue. ...read more.

Another question is raised, however, as to the importance to each leader, of the ideology that ostensibly drove both down the paths of leadership that they took. Whilst Liberal Right Wing historians place overwhelming emphasis on Lenin's hunger for power, using the empty promises made leading up to the October Revolution as evidence, his writings reveal an undying commitment to the Revolution. In Stalin's case, it can be said that many of his policies were based on Lenin's blueprint, Pipes remarks that Stalin's 'education, ideology and modus operandi were all Lenin's'9. He also writes 'I believe that Stalin sincerely regarded himself as a disciple of Lenin, a man designed to carry out his agenda to a successful conclusion'10. Stalin did this particularly overtly, promoting the 'cult of Lenin' following his death. In doing so however, he directly contradicted Lenin's wishes for such an idea not to be perpetuated. This seems indicative of Stalin's whole career as the despotic leader of the USSR. Whilst he presented his own rule as the unwavering continuation of his predecessor's, constantly justifying his actions against Lenin's principles, he allowed himself to be driven by his own personal views and impulses, leading him to stray from the successful conclusion of Lenin's agenda. 1 Trotsky, quoted in Stephen F. Cohen - Rethinking the Soviet Experience pp41 2 Stephen F. Cohen, 'Bolshevism and Stalinism' in Tucker, ed., 'Essays in historical interpretation' pp12-13 3 Maxim Gorky, quoted in M. McCauley, 'Stalin and Stalinism' pp86 4 Sheila Fitzpatrick, The Russian Revolution, 2nd edition (1994) pp98 5 M.N Ryutin, quoted in M. McCauley, 'Stalin and Stalinism' pp46 6 http://www.marxists.org/archive/lenin/works/1901/witbd/ch02.htm#02_A 7 http://www.marxists.org/archive/lenin/works/1917/staterev/index.htm 8 Stalin, quoted in 'From Lenin to Stalin', Victor Serge, 1937 9 Richard Pipes, Russia under the Bolshevik regime pp98 10 Richard Pipes, Russia under the Bolshevik regime pp112 1/11 ...read more.